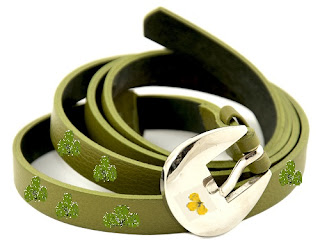 Source? Sheelagh probably got it from a leprechaun cobbler; possibly a relative. If it was pisky work with would be more ornamented.
Significance? In a weird way it was a symbol of good faith, as well as an acknowledgement of her attractiveness
Fate? Sheelagh probably disposed of it after she married, unless she kept it to tease Nathaniel
Author’s inspiration? I like to add small bits of social culture.

“Wait, I’ll tie meself up first, ‘case I meet wid another hob.”
She took off her apron and cap, and she gathered the loose dress underneath into a belt.

Sheelagh Chalk was a buxom and very pretty leprechaun colleen from the chalklands. As such, she would have grown up around hobs and would know their culture. As a fair-skinned colleen, Sheelagh could pass easily, so it wasn’t unusual that Tab and Josefa met her working in a pub in Adelaide. The pub was called The Harvest Hob, so Tab informed Josefa it was probably owned by a hob rather than a human. He was right. The publican, Nathaniel Applebee, was a tall, placid man with brown hair and blue eyes, who spoke with a marked hob accent.
Sheelagh, who acted as his barmaid, and chambermaid, was…

…a young woman with a frilled apron over a loose print dress and a cotton cap over her red hair.
She brought breakfast to Tab and Josefa and told them her name and her intentions.

It was Sheelagh’s partiality for the publican that led her to employ her hob-deflecting belt. She agreed to conduct Tab and Josefa over there to where they wanted to go but put a belt around her print dress before they left.
Having delivered them to their destination, she took the short route home and…

took a step away and disappeared into the trees, untying her belt as she went.
Later, Josefa recalled this behaviour and asked Tab about it.

“What was all that belt-loosening and tightening she kept doing? Is it anything to do with being a leprechaun?” she asked Tab as they drove through the suburbs.
He laughed, not because it was funny but because he felt on top of the world. “No, it’s to do with Nathaniel being a hob.”
“I don’t understand.”
“You know how Peck is about the colour green?”
“Um, yes…”
… “Well, hobs are like that with loose clothes. They’re the opposite of piskies in that. So, Sheelagh loosens her belt when she’s teasing Nathaniel and tightens it if she’s somewhere that another hob might wander by.”

In other words, although Sheelagh wasn’t yet betrothed to Nathaniel, she dressed to please him, while trying to avoid pleasing any other male hob she might encounter. Of course, a tight belt would attract a male pisky, but no doubt Sheelagh would deal with that by a summary loosening. She could simply say she was already committed but to Sheelagh’s mind that wouldn’t be half so much fun!
Sheelagh and her belt appear in Sunshower 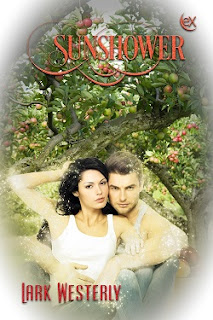 The goal for 2017 was to write a post a day profiling the background behind one of my books; how it came to be written, what it's about, and any things of note that happened along the way. 2017 is well behind us, but I ran out of year before running out of books. As of June 2018 I STILL hadn't run out of books, but many of those still to come are MIA by which I mean I don't have copies and remember little about them. There are more new books in the pipeline, and I'm certainly showcasing those, but in between times, I'm profiling some of my characters, places, objects and themes. Thank you so much to everyone who's come along on this journey so far!
Posted by Flora at 07:03