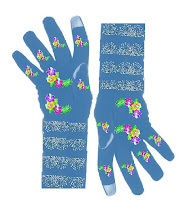 Source? Flora acquired them from various bachelors
Significance? Gloves were the traditional gift used to “buy off” a woman who proposed to one in leap year
Fate? Flora sold them in order to purchase a cow
Author’s inspiration? I read this interesting fact and wanted to use it in a story
Appeared in? The Leapling and the Horseshoe Nail (2016)

‘I should ask for gloves,’ said Peg. ‘A good pair of gloves, say, could be a month’s egg money for a poor girl.’

Flora O’Leary is unmarried and not especially desirous of changing her status…save for the annoyance of having her single status cast up at her by most people she knows. Peg o’ the Sidhe, a fairy woman who asks for a ride in Flora’s cart, suggests as solution.

‘It’s said that a woman may ask any free man she pleases to marry her in Leap Year,’ said Peg.
‘I have heard that.’
‘But have you heard what he must do if he refuses her?’
‘He gives her a gift to salve her embarrassment,’ said Flora.
‘I should ask for gloves,’ said Peg. ‘A good pair of gloves, say, could be a month’s egg money for a poor girl.’
‘That is very true. But why would any man wish to salve my embarrassment?’
‘To be sure he would not! But you are a leapling. You could ask seven men to marry you,’ suggested Peg. ‘That way, you would have seven pairs of gloves. ‘twould be enough to buy that cow you’ve been eyeing at Flynn Jamison’s place. She is a good cow, and she would bear good calves.’
Flora bit her lower lip. To be sure, asking men to marry her would be embarrassing, but no worse than the sting she felt with every pitying look. ‘I’ll do it!’ she said. ‘Then I’ll have my cow and I can do the same thing in four years’ time!’
‘Best not be greedy, pet,’ said Peg. ‘Seven men is enough, even for a leapling, I’m thinking. You can set me down now and thank you for the ride.’

Flora acted on the notion and invited Paddy Brown to marry her. This suggestion was successful in its aim, but Flora had to put up with some insults before she got her gloves.

‘I am a spinster of this parish,’ said Flora, ‘and by the tradition of the leap day I ask you to marry me.’
‘What?’ Paddy Brown’s handsome face went red and he burst into a laugh. ‘You must be joking, woman!’
‘Indeed I am not,’ said Flora. ‘I take it you refuse me then?’
‘You can take it any way you please,’ said Paddy. ‘I’m not the marrying kind and even if I was I wouldn’t marry a giraffe of an old maid.’
‘Then, by the tradition of the leap day you must give me a gift instead,’ said Flora.
‘You must be joking!’ spluttered Paddy again.
Mary giggled. ‘No she’s not. She’s right, Paddy. Since you refused her you have to give her a gift or be shamed in the market place.’
Paddy, still red in the face gave an angry laugh and tossed a coin in the dust. ‘Take your price then, you hoyden!’
Flora shook her head. ‘I want gloves,’ she said. ‘A good pair of gloves to hide my un-ringed hand.’
‘You’re mad, woman!’
Flora waggled her bare left hand. ‘Are you refusing me? Shame on you!’
‘Whisht, woman! Don’t be making a scene!’
‘You’d best get her gloves, Paddy,’ said Mary with a grin. ‘Or else you can get your…apples… elsewhere in future.’
Paddy turned to her. ‘Aw, Mary…’
‘Go on.’ The apple girl winked at Flora. ‘Take him off to the new glover, girl, then send him back to me for his reward.’
Flora, scarlet-faced, kept her head high as she walked beside Paddy Brown to the glover’s stall.
‘I’ll not forget this, old maid,’ he said. ‘And make no mistake, I’m doing this just to please Mary.’
‘How odd,’ said Flora. ‘Why do you call me an old maid when you’re older than I am?’
‘Maybe because you’re so ugly,’ said Paddy.
‘How odd,’ said Flora again. ‘Until today, I’d have said you were quite good looking. Now I think you look like a bull with a bellyache.’ She lifted her chin. ‘I see your point, though. It was a bad trick to play on you. Let’s forget it.’
‘Not so fast,’ said Paddy Brown. ‘If I don’t buy you these gloves Mary will never let it lie.’ He thrust some coins at the glover. ‘Give this old maid whatever gloves she wants,’ he said. ‘It will hide her embarrassment for another year.’ He stalked off.
Flora, heart thudding, turned to the glover who must, she thought, be minding the stall for his da. He looked up at her from his low stool and gave her a crooked smile. ‘Not to worry, pet. I have some lovely gloves for you.’ He handed them over. ‘But just a little hint, pet? Next time you propose to a man you should aim a little lower.’
‘I don’t know if that’s possible, lad,’ said Flora.

The gloves were worth the insults, so Flora persisted and…

At the end of the week, Flora had made six proposals and had six pairs of gloves. She was laying up a fine line of insults but running out of bachelors.
On the sixth night she laid out her gloves and calculated the cost. She needed one more pair and then she could go to talk to Flynn Jamison about the cow.

The seventh pair of gloves proved surprisingly difficult to get but eventually Flora prevailed. She got the gloves and the cow and something else as well.

Flora O’Leary’s ostensibly embarrassment-salving gloves appear in The Leapling and the Horseshoe Nail. You can buy the epub version here.