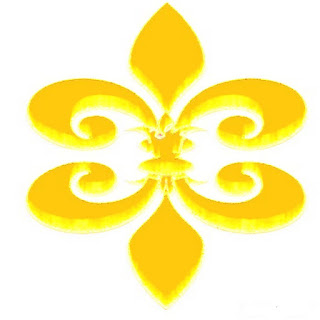 Source? It was in the ruins of the Conners’ Hall
Significance? It was a test of resolve, innovation and determination
Fate? It’s still in the ruins
Author’s inspiration? It seemed a probable aide memoir
Appeared in? Candle Iron (2000)

***
A hundred stars seemed to beam at her, but as her eyes adjusted she realised it was rank upon rank of stumpy candles, and, rising above them, in the centre of the chamber, a single candle iron.

Allyso Tormblood, the heir to Torm Castle, escaped the siege of Torm by sliding down the well way, an escape route made by her ancestor “small Lord Torm”. Allyso herself was small for her age. At thirteen, she could barely pass for eleven. Nevertheless, her lack of stature gave her the chance of escape. Her uncle, Merrit, the current Lord Torm, hadn’t a hope. Allyso was determined to find the gem of time, which, she hoped, would help her to correct the errors that led to the siege.
Her travels brought her to the ruins of Conners’ Hall, where she met a girl named Leonard and her mentor Seer Wootton. Wootton heard her story and seemed reluctant to give her much help, but he took her to the candle iron chamber.
.
A draught hissed in from the aperture, and the flames of the candles flickered so much that some of them went out. Only the candle iron glowed with a steady white light.

Wootton supplied Allyso with the information she needed to find the gem, but he left her with a conundrum; while she was in the chamber, she would remember the instructions, but once she left, she would forget them. Allyso, left alone in the chamber, and aware the candles lighting her way out of the place were guttering out, sought something to write with. There was nothing…except…

It stood before her, lily-petalled, white hot, burning with a steady glow the guttering wax candles could never match.
'All this way,' she said, 'and for what? I know I must find and walk the Cloudway, and look in the Crystalium Caverns through Dragon's Gate. But what is the point of knowing if I have to forget it again?'

The candle-iron glowed. Its iron petals alone now lit the chamber and Allyso thought she must have been duped. This could not be the seer's living quarters after all. Apart from the splashing water and dead candles, there was no sign of habitation. No chairs, no beds, no books or implements.
Only the candle-iron stood out.
So burning hot, like a brand.
Allyso stared at the candle-iron. If she could take it with her, she could light her own way out. And carrying that, she would remember her time with the seer. She must remember, for where else could she have come by such a thing in a stonewood forest?
She would take the candle-iron as far as the coffer where her belongings lay. Then she could write her message to herself and leave the unwieldy thing behind for Leonard to fetch.
She tugged at the stem of the candle-iron, but it was set in solid rock. She stared at it blankly, as a new idea came stealing into her mind.
If she could not take the candle-iron, she could surely take its image...
Allyso raised her arm and stared at the pale underside. If there had been a knife in this place she could have written her reminder message in blood. As it was, she must use the only other way there was. Or else give up, go back and return to Fielding. Dagg and Mohr would find her a place to live...
Allyso clenched her fist and reached over the candle-iron. She closed her eyes, recalling the terrible pause on the lip of the well of Torm. Faced with an impossible choice she had chosen to go forward. Forward she would go again, because there was really no other way to go.
With a rush, she brought her arm down hard on the glowing metal.

After Allyso, branded and scarred, had left on her journey, Leonard confronted Wootton with anger over his inhumanity in using a post-hypnotic suggestion to make Allyso forget what she needed to know. He pointed out that Leonard used her skills at time. She said yes, to save someone…

'And I had to use mine to save the girl of Torm from the consequences of this quest.'
'To save her! She burned herself so she'd remember. Does that sound as if she wanted to be saved?'
Wootton lifted his hands. It might have been a gesture of helplessness or he might have been giving up on the discussion. Instead, he let one sleeve fall back to reveal a pale bare arm. He thrust it in front of Leonard and displayed the scar of a long-healed burn. The brand of a candle iron.
'She wanted to be saved as little as I did when my turn came,' he said as the sleeve fell back into place. 'You might call it a brand of courage, or the key to knowledge. What she asks is all but impossible, but having put herself through such pain - how can she ever turn back?'
'I never heard of anything so barbaric,' snapped Leonard. 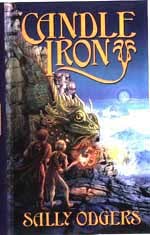 'I expect you have,' said Wootton remotely. 'Even in your own world.'

Allyso’s quest was painful, frightening and confusing, but of course she won through in the end. She, like Seer Wootton, would carry the candle iron scar all her life.

The candle iron appears in Candle Iron, which won the Aurealis Award.