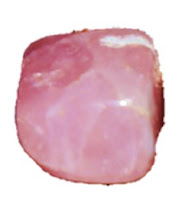 Source? Jin got it from Rory Inkersoll
Significance? It gave her a focus point when she went looking for her destiny
Fate? It was lost near the underwater gateway, but Divka the fisher maid probably appropriated it
Author’s inspiration? I like rose quartz, and it has a pleasant symbolism
Appeared in? Man Overboard

***
Jin dipped her fingers in and stirred the contents. She hoped for aquamarine or driftwood, but what came to hand was a piece of stone in a gentle shade of pink.
“Rose quartz,” Rory said.

Jisinia Peckerdale was looking for destiny. Or maybe adventure, or purpose, or danger… or just something new. Having made up her mind to strand herself on an island and investigate a dangerous underwater gateway, she first visited Reverend Rory Inkersoll in the pixie forest, hoping for guidance. Rory, a distant connection of her mother’s, gave her a biblical reference and offered her a choice of focus items he kept in a basket. Scrupulously, he told her the piece of rose quartz she took out would not be magical until or unless she charmed it.
Jin took it nevertheless and used it to find Robin Cottman, another distant connection, who rowed her to the island. Once there…

Jin fished her crystal out of her sash and held it in her palm. She watched it sparkle with a pink glow that held nothing of the sweet or insipid. What did that mean? She shook her head. Old Rory knew, no doubt, but he wouldn’t tell her.

Jin took her time to prepare her rose quartz crystal for its task.
She could have charmed it in a few minutes, but she thought that instead she would make it part of the island and of her plan. For the rest of the day, she set it to warm in the sunlight on the sand. That might represent her future, whether over here or over there. A sea-soaking would come next because the gateway she sought was underwater. She’d follow that by wearing the crystal over her heart to bring it into line with her desires.
While the crystal prepared, Jin spent her days in the blessed silence, resting in the sun, watching the stars, doing simple garden maintenance and thinking.

Jin took the crystal with her when she ventured to the underwater gateway. A fisher maid showed her the way and asked for a price. Jin offered the crystal.

“I have a charmed crystal if that would do.”
The fisher maid ran her fingers over the quartz. “You need that to find what you’re seeking.”

She ended up performing an unwilling rescue for a drowning human and had to let the crystal go.

…she supposed her rose pink crystal was gone forever.

Was it though? Divka the fisher maid might easily have retrieved it. She might have kept it too, but probably not. Divka had her own code of conduct.