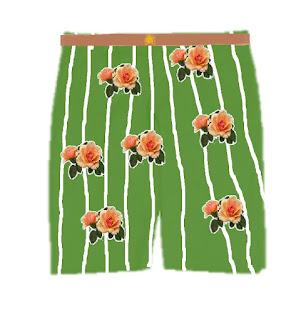 Source? They may have been perfectly normal shorts until Deek got hold of them
Significance? Deek loved to be outrageous and he especially liked to tease staid Kris Peckerdale
Fate? He'd never get rid of them
Author’s inspiration? They popped into my head

...and green and white striped shorts with apricot roses swarming among the stripes.

Deek Caffrey was a flamboyant halfling who considered himself a friend of Kris Peckerdale in the 1980s. He was loud, ginger-bearded and had the most execrable taste in fashion. When he showed up thirty years older but no wiser, he was wearing green and white striped shorts with roses, along with equally awful hat, shoes, socks and shirt. Kris was less shocked than Deek had hoped, and after a brisk exchange of views and opinion, Deek agreed to tone it down to cut-off white denims and a less offensive shirt.
Deek first appeared in Calico Calypso. He was so much fun to write I brought him back for a small but significant appearance in I Promise.

The goal for 2017 was to write a post a day profiling the background behind one of my books; how it came to be written, what it's about, and any things of note that happened along the way. 2017 is well behind us, but I ran out of year before running out of books. As of June 2018 I STILL hadn't run out of books, but many of those still to come are MIA by which I mean I don't have copies and remember little about them. There are more new books in the pipeline, and I'm certainly showcasing those, but in between times, I'm profiling some of my characters, places, objects and themes. Thank you so much to everyone who's come along on this journey so far!
Posted by Flora at 00:09