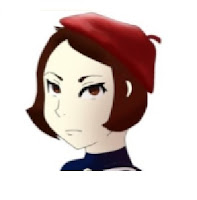 Source? This is how Enno chooses to appear
Significance? The term and the image conjure Enno as a rather detached soubrette
Fate? Like Enno, it’s eternal
Author’s inspiration? I wanted something stylish, off-beat and continental

Enno is the wistful spirit of the city. She’s not a ghost per se, but more like a genius locus; a minor goddess created by and through the city’s dark alleys and neon lights.

Nineteen or so? She'll grow no older;
lingeried in theatre flies;
in the wings, in soubrette's pose

Enno is a natural around the theatre. She likes jazz clubs but not bars. She makes a lonely figure, but her sense of style is all her own and in a way that’s what she is; a style, an idea, an image of the evening.

Enno saunters through the close,
with leather skirt and kohl-dark eyes,
a teardrop bag swung over-shoulder,
gibsoned clogs and frenched beret;
crazy patterned, some do say.

Her face is pale and urchin-bright
with nose tiptilted; double wings
of hair in blackbird curve reflecting
scattered light from corner signs.

Enno’s name is as enigmatic as she is. It hints at the Italian, and she is surely continental. It’s a short little soubriquet, not-quite-a-palindrome, but beginning and ending with a vowel. The accent is on the first syllable.        However, it has belonged to Germans, Estonians and a Taiwanese singer. There’s nothing new under the sun.