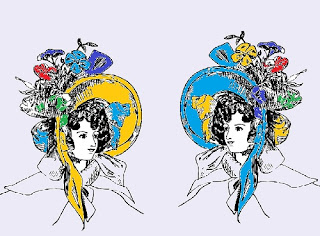 I’m pretty sure twins and doubles, like redheads and Bond villains, appear far more frequently in fiction than they do in life. Why not? Their existence, whether suspected or actual, offers all kinds of tasty plot-points. Handy plot points aren’t static. They move on with technology and social and legal change. DNA has changed the face of crime fiction, mobile phones have changed adventure, and I could go on, but today I’m looking at twins and doubles in my fiction. Mind you… I’m seeing fewer than twenty books here, with actual twins appearing in just thirteen books (or series, two of which were accepted but never published, and one that I wrote very early.) This takes it down to ten which makes it about 2% of my books that have actual twins. That’s probably not far from the real-life figures.

Way back when I was fourteen or so I wrote two books in the Kamarand series. This was the very early 1970s when twins were a staple in children’s fiction. Thus I had my twins; the loud Leanne and the thoughtful Paul. I don’t remember if they had a surname, but they did have a pony that turned out to be a unicorn in hiding.

In Anna’s Own, a historical novel,  Anna and Jack Kelly have twins, Janie and Jack. Janie dies in babyhood during an epidemic, leading Anna to treat Jack more leniently than she does her three remaining daughters Mary, Maggie and Bridget.

In A Box of Sundries, Quinn and Quentin Taylor are twins who accidentally buy a stolen painting when shopping for a present for their parents.
In the romance Pen and Ink Pen’s husband-to-be Duffy has twin sisters named Niamh and Helene. Niamh and her hob husband have a large family and Helene is expecting her first; which may be twins. Niamh possibly has a set in her brood, too.

In Floribunda and the Best Men, Pen and Duffy are expecting twins themselves. Pen is delighted because, at forty-two, she never expected to have a family at all.

In Kayak! Mark and Luke Winwood are twins who go kayaking down the Bandinangi River. Mark is the brash one, and Luke is quieter. When Mark disappears, Luke has to endure both survivor’s guilt and a lot of questions.
In Man Overboard, it’s implied Honey and Hob might be expecting twins. Later this is confirmed when the daughter Skye thought they were having is born and named Islay along with a boy they name Harry

In Mix and Match, Jasper and Jet Diamond are identical twins. Jasper is a documentary film maker, Jet a financier and yachtsman. They have never got along very well and are easy to tell apart because Jasper has slight nerve damage from one of their early altercations.

In Terrible Twinge, Rhys and Ceridwen Morgan are twins who have matured unevenly. Ceri is tired of childish rivalry and horseplay, while Rhys is still right in there with the ducking and water bombs.

In Trinity Street, Moss and Sib are elderly genius twins in the 27th Century. They're very, very bad news.

In Triple Treat, (accepted but not published to date, Jet and Jasper Diamond appear briefly, while their non-identical twin sisters Gentian and Sabrina are major characters. Gen and Sabrina are known as "The Diamond Duo".

In Wedlocks, a rom sus which again was accepted but never published, Gift Winter and Elisabetta Gundas are twins who were adopted by different families and have never known about one another. When they finally meet it’s not pretty.

So, there they are. Thirteen sets of twins, of which five are identical; three sets of girls and two of boys. In three cases (Gift and Elisabetta, Jasper and Jet and Agatha and Ellery), they had to be for the plot to work. Of the eight fraternal sets, six are boy/girl and one is two girls and one lot unborn and undecided. These statistics probably mean… something!

STOP PRESS! I just remembered Charlie and Charming, twin boys who appear in short stories and poems for Prints Charming books... I'll deal with them in Here Be Royals! 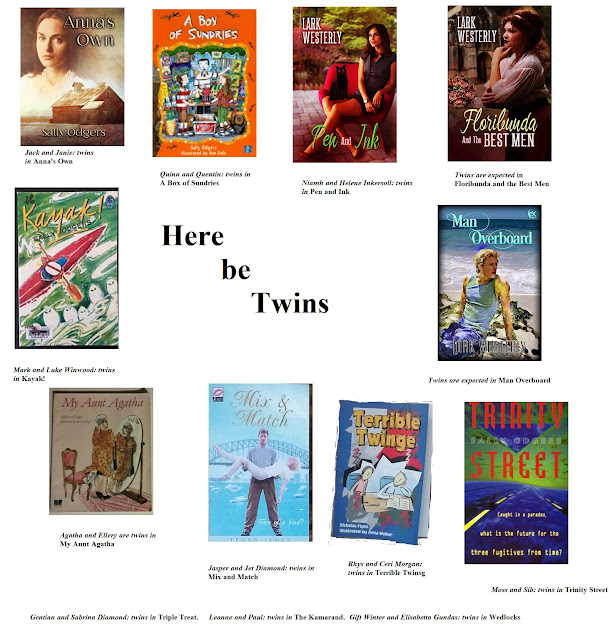