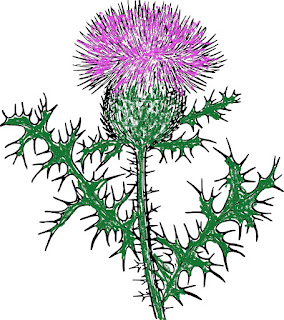 Source? Genista dar Whin made it, remembered it into being, brought it back, or forward…
Significance? Ash knew Genista had a penchant for prickly plants
Fate? Fernborn ate it
Author’s inspiration? Thorny plants often have lovely flowers
Appeared in? Summerfeste

***
“What, no thistles, Genista?” he asked, sucking the thumb. He smiled despite the sting and the taste of blood. “You’ve thought of everything else.”

Genista dar Whin was one of the last of the hillpure; a hillfayre woman with no clod (villager) blood. She was also related to almost every eligible hillfayre male, so she was unable to have children. She couldn’t spend much time out of the hill, but she made the most of those opportunities. On one of her ventures outside, she met Ash Coleman, a villager with a strong dollop of marshfayre blood. Something about Ash appealed to her and she chanced, or maybe engineered, a few encounters. She raised a thorn circle for them. Subsequently Ash lost his memory of that but the brambles haunted his dreams.
The herb warden gave him a draught of fernseed to clear his mind and his vision. The scent of furze, a thorny plant, attracted his attention and he swallowed some of the brew…

He brushed it aside and came awake in a circle of brambles.
“Not again!” he exclaimed when the memory that had eluded him poured into his mind.
He sat up, and the circle whirled, simple blossoms mingled with leaves, and berries in all their stages. A briar twined among them, adding its sweet pink flowers and dainty thorns. The pop of furze pods drew his attention to a bristling bush behind him, and curiously, a wild plum tree drooped a cluster of fruiting limbs. Ash reached for one and recoiled as a long thorn pierced his thumb.
“What, no thistles, Genista?” he asked, sucking the thumb. He smiled despite the sting and the taste of blood. “You’ve thought of everything else.”
“Thistles I can raise for you, and teasels, too.” The hillfayre girl stepped into the circle. She stood inspecting him with amused interest. “What brings you back here, Ashwin?”

She reached for a shrivelled stalk beside the path and plucked a handsome purple globe out of the air. “Here’s a gift for you.”
“No thanks.” Ash put his hands behind his back, smiling despite his resolution to be as cool as she.
“You asked me for a thistle when last we met,” she said.
“I did not. I said I was surprised you hadn’t made one. Grown one. Whatever it is you do with your thorny things.”
“Then perhaps we will give it to this lady instead.” Genista caught a plaited rein from the shadows and drew forth a pony mare, a grey with a particoloured mane and mismatched eyes. “She is called Fernborn,” she said to Ash. “She will stay in the clodworld for a while—long enough to bear three foals.”
“Three?” Ash watched as the pretty mare ate the thistle flower from Genista’s hand.

That wasn’t the first encounter between the young charburner and the almost ageless hillfayre, but it was one of the happiest.

Genista dar Whin conjures her remembered thistle in Summerfeste, #2 in the Garlands of Thorn and May trilogy.

The goal for 2017 was to write a post a day profiling the background behind one of my books; how it came to be written, what it's about, and any things of note that happened along the way. 2017 is well behind us, but I ran out of year before running out of books. As of June 2018 I STILL hadn't run out of books, but many of those still to come are MIA by which I mean I don't have copies and remember little about them. There are more new books in the pipeline, and I'm certainly showcasing those, but in between times, I'm profiling some of my characters, places, objects and themes. Thank you so much to everyone who's come along on this journey so far!
Posted by Flora at 00:01