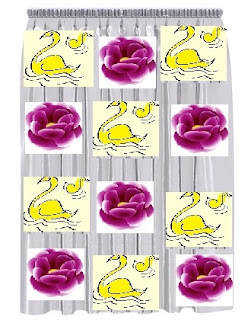 Source? Lockie bought it from a shop… maybe Coles Variety
Significance? It showcases Lockie’s personality
Fate? It could have been trashed when Mouse and the Traps parted company, but more likely it was one of those things that mysteriously hung around and surfaced in the occasional spring clean until one day it was perished enough to come apart
Author’s inspiration? There were some pretty horrid shower curtains back in the day
Appeared in? Freedom

That was that, but Lockie went off that afternoon and came back with a plastic shower curtain, printed with large yellow swans and pink peonies, which he strung up ceremoniously across the rear section of the van. Mouse was touched by the thought and appalled by the colours, but Lockie was so pleased with her praise that she almost convinced herself.

It was the 1960s and runaway Terenza “Mouse” Rhodes had fallen in with three young men named Keith, Mike and Lockie. They styled themselves The Plaids and were trying to break in to the music scene. Renamed The Traps, they took Mouse as their manager and travelled about playing at dances. After a scare in a hotel room, Mouse…

…addressed the hotel problem by buying a cheap delivery van from a florist who was trading up. The Traps thought she was out of her mind, but she soon talked them round.
“We can all sleep in it,” she explained. “There’s plenty of room.
“But what will people think?” asked Lockie.
Keith laughed cynically, but Mouse grinned at Lockie and ruffled his hair. “I’m your sister, remember—or maybe your cousin? Oh—grow up, Lockie. Most people think I’m a groupie anyway, so what does it matter?” She pulled a face. The foot-in-the-door man had been quite explicit about what he expected and why he thought he had a right to it. She entertained three boys on a regular basis, he’d pointed out, so why not make it four?
“Well—what does it matter?” she repeated now. “Worried about your reputations?”
“It won’t hurt us,” Mike said. “But it might hurt you.”
“Well it won’t. If it bothers you to share I can sleep in the cab or underneath or . . .”
“On the roof?” Keith suggested, fondling his cornet.
“No,” Mouse said severely. “It might rain, and a seagull might fly over. But think how much money we’ll save on rooms.”
The Traps thought, shrugged, and gave in.
“All right, Mouse,” Mike said. “You’re the boss—as usual.”
That was that, but Lockie went off that afternoon and came back with a plastic shower curtain, printed with large yellow swans and pink peonies, which he strung up ceremoniously across the rear section of the van. Mouse was touched by the thought and appalled by the colors, but Lockie was so pleased with her praise that she almost convinced herself.

It was Toni’s first experience of cross-country touring, and she was finding it more exhausting than she’d supposed. The Traps, veterans of the old FJ and the van with the plastic swans and peonies, had known what to expect, but the strain of trying to out-sing the chanters and clappers was telling on their nerves. 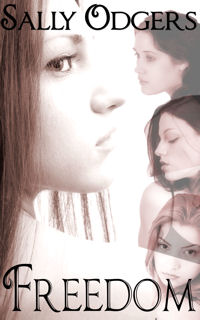 Eventually, after a stint at a club they called The Mousetrap, things fell apart, The Traps broke up and the van was presumably sold… Who knows what happened to Lockie’s shower curtain? It was a kind thought though, and Mouse and Lockie remained friends. Well into the 1990s, when Mouse, now married and a mother, was a well-respected music manager, Lockie was still part of her entourage. Neither of them would have had it any other way.