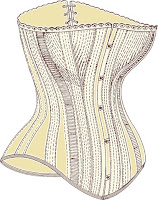 Source? Ness brought them from Scotland
Significance? Hector was taking an interest!
Fate? Hector defenestrated them
Author’s inspiration? It’s the kind of thing Hector would undoubtedly do. Besides, have you never suffered damage from a recalcitrant underwire or a nasty bit of frayed elastic?

She laced on her stays, then bundled her sark over her head.

The morning after a girl’s wedding, she might expect some consideration, but Ness Campbell, newly married to the much older and extremely pugnacious Hector, didn’t get much. Hector informed her she was to get dressed and be ready to travel. Ness complied, but she wasn’t without backbone.

Hector waited, eyes glinting, as if he enjoyed her embarrassment. Ness lifted her chin, determined to outface him. If he thought he had married a timorous wife he was wrong. She left the screen and laced herself into her gown, blushing as she encountered Hector’s gaze.
The pair travelled on to Hector’s new property, and when they reached it, Ness was weary, felt grubby and wanted a wash. She found a clean cold little creek and set to work to make herself more comfortable.

First, she washed her gown…

Next, shaking with cold and her own audacity, she stripped her sark over her head. She had not been wearing her stays, for a strip of whalebone had worked loose and made a painful reddened patch at her waist. Hector had noticed it two days before, and had seized the stays and flung them out the inn wife’s window, vowing that when he put his hands on his woman he wanted to feel bonnie flesh, and not whalebone and flannel. Ness glanced down at her pale body, faintly green in the forest light. Anyone who saw her now would take her for a kelpie’s bride!

Hector wasn’t pleased to wake up and find his bride gone, but she hadn’t left him, and at least he got his way with the stays. Heaven knows what happened to them in the end. Maybe the landlord’s goat ate them.

Ness and her stays appear in Heather and Heath 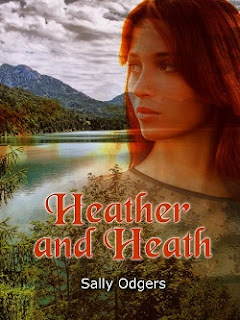