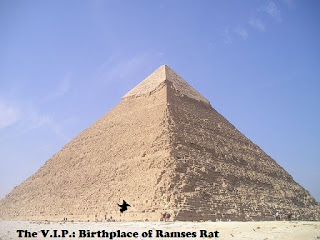 Source? The Egyptians built it
Significance? It gave Ramses a sense of importance
Fate? It’s still there, probably inhabited by some of Ramses’ descendants
Author’s inspiration? Why not?
Appeared in? Ramses Rat and the Great Cat Bastet

***
I was born in a nest in a V.I.P
When Ramses Rat was a ratling, his mother did her best to instil in him a sense of pride, place and purpose. She succeeded. Part of Ramses’ sense of consequence was the fact that he was born in a V.I.P., or Very Important Pyramid. Ramses never told which one it was, but presumably it was one of the big ones.
As Ramses put it:
I was happy there with my brothers and sisters. There was plenty of food and some old linen to chew into a cosy bed. Now my mother had new ratlets to look after. That meant I had to find a new home.   ‘Goodbye, Ramses,’ said my mother. ‘It’s time for you to make your way in the world. Remember this. There is a time to fight, and also a time to run. A wise rat learns to tell the difference. You are as good as any rat and better than some. You were born in a Very Important Pyramid.’  ‘I’ll remember, Mother,’ I said.  ‘See that you do,’ she said. ‘Become a wise rat. Then you will live well and prosper.’
‘What if I don’t become a wise rat?’ I asked.  ‘Then you won’t live long and you won’t prosper,’ said my mother.  I decided right then that I would become a wise rat.

As Ramses sought his new home, he ran against some unpleasant rats that tried to cow him. Ramses wasn’t having that.

‘I am not a lesser rat,’ I said to myself. ‘I am Ramses Rat. I am as good as any rat and better than some. I was born in a V.I.P.’ I turned and ran back to the tunnel.

Ramses faced a great deal of danger and discomfort, but he kept his head high. After all, he was born in a V.I.P. and he never forgot it.