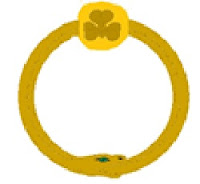 Source? Jeremiah used it when he married Garnet. Initially, it had belonged to his father
Significance? It was proof Jeremiah wasn’t quite what he seemed
Fate? Garnet kept on wearing it
Author’s inspiration? It was a gothic prop for a gothic romance
Appeared in? Gold’s Bride

When Jeremiah Gold married the reluctant Garnet Landis, he did so unexpectedly, by applying to a convict priest to perform the rite. He didn’t have the time or inclination to go shopping, so he used a signet ring he had already.

…she found herself wearing a second ring, this time a strange serpent-shaped signet ring Jeremiah removed from his own little finger.

Having been married in haste and not by choice, Garnet soon made plans to escape.

She had no money, but the ring she wore could surely be pawned or sold if need-be. It was unusual enough, but, unlike a fob watch it could have no name engraved to establish the owner. Nothing but the serpent’s head with the tiny sapphire eye and the clover leaf seal.
She lost the ring in melodramatic circumstances and it was found by a young opportunist named Frederick.

A week or so after he had taken the ring the red-haired lady had dropped in the dust, he drew it out to admire the delicate patterns. The serpent head intrigued him, and the sparkling blue eye seemed to wink at him.

Unfortunately for Frederick, Harbord, a one-time servant and lately murderer, happened by and took it. Frederick’s description of its owner gave Harbord more ideas.

Frederick nodded. “C’n I have my snake ring back?” he asked boldly.
Harbord laughed. “You’ll be lucky.”
“But it’s mine! I found it in the dust!”

Horrible Harbord gave Frederick a task, promising to think about giving him back his treasure. Much later, when Jeremiah was trapped in a burnt building, Garnet finally learned something about his past.
“Where are they now, your mama and papa?”
“My mother passed on, my father—I believe is gone back to England.”
“You believe?”
“Just—so.”
“But who is he? Why did he never wed your mama?”
“A convict—and a Jew? He would have been cut off.”
“You had nothing from him?”
“Not his name. Only the serpent ring which he gave my mother.”
“And which you forced on me. Oh, why did you ever do it?”
Eventually, Harbord came by a nasty accident and Frederick re-appropriated the ring.

So Garnet got it back and gave it a good twisting on her finger when something new happened to rile her.