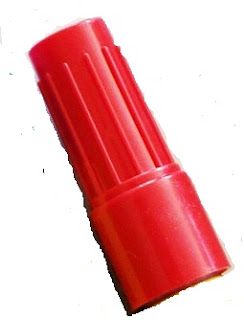 Source? Justin’s pencil case
Significance? It got Justin a trip to the dentist and some attention from Serendipity Creed
Fate? Probably lost before the end of the year, unless Justin stuck it in the account he wrote for Evie Janus
Author’s inspiration? Who of my generation hasn’t chewed or otherwise ill-used those blue plastic pen lids and got one stuck over a tooth?
Appeared in? One Weird Week

During Japanese I got an idea for my costume when I pulled the lid of my red marker off with my teeth.
Justin Archer was having a seriously weird week. His little brother was being haunted by an autograph, Evie Janus was cross with him, Granny was pursuing him, a girl in blue was troubling him, Jarrod Dennis was bullying him, and he hadn’t got a costume for the school social.
Fortunately, the marker lid gave him an idea.

I found out it was wedged on my upper left canine tooth. I tried to push it off with my tongue and managed to bite it (my tongue I mean) by mistake. That made my eyes water so I screwed them up and tried to suck the lid off instead.
‘Archer’s having a fit,’ said Jarrod Dennis.

Miss Leeson sent Justin to the dentist. In the waiting room, he encountered Serendipity Creed.

‘Justin, are you practising lycanthropy?’ said Serendipity Creed.
…’Ugh?’ I said.
‘Lycanthropy. Transmutation into a werewolf.’
I shook my head. Then suddenly I got an idea for my costume. ‘ee, ‘anks,’ I said.

‘The one and only boy with the plastic fang…’

Now free of the plastic fang, Justin was also free to enjoy (not) the rest of his one weird week.

Justin Archer and his red lycanthropy marker lid appear in One Weird Week. 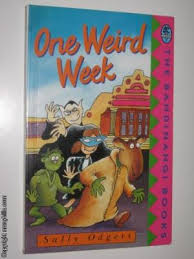