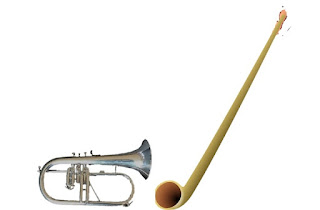 Source? With the irrepressible Bless brothers, it’s difficult to say
Significance? It was one more distraction for Tom and his dad
Fate? Nothing. They still have it – or them.
Author’s inspiration? I’ve always liked the word and surely everyone is fascinated by alp horns?
Appeared in? The Kissing Ring (2017)

It was, Tom thought, as he returned to the B&B with the Bless brothers roaring songs in some unfathomable language in the back seat, a thoroughly civilised way of doing business. He had a written report that looked as if it should have taken days to complete. The Blesses had conjured it up while Tom was buying his round at the bar, right before Johan conjured a flugelhorn and marched around the outside of the pub playing a solo.

Hugo and Johan Bless were the independent building inspectors who signed off on Peckerdale Grene Community Tower, designed by Russ Merriweather, who also oversaw the construction.

Johan and Hugo Bless were tall and sturdy with fair hair and blue eyes. If he hadn’t known better, Tom would have supposed they were Swiss or Scandinavian. They were, in fact, Alpenfee men, from a family long established on both sides of the gates.

Tom liked the Blesses, who were fraternal twins, but Russ found them disconcerting and soon left Tom to deal with them.

Watching the Bless brothers in action was an education. They measured, metered and echo-tested, wrote down results and consulted. Since some of the equipment they used looked unfamiliar, and possibly often non-functional, Tom suspected the actual testing took place during the times they rested casual-seeming fingertips on a strut or panel.

At another stage of construction, Russ and his wife Kay flew over the strait to check on the progress. Kay was a music teacher, so she at least appreciated the twins.

“How’s the project?” Tom asked on their return.
Russ gave him a resigned look. “Bloody pixies had the building inspectors in again.”
“Johan and Hugo Bless? Did Johan play the flugelhorn?”
“Alp horn,” Kay said.
“What’s that?”
“It’s a sodding great thing like a water pipe with a bend in it.” Russ sighed.
“We couldn’t work out where he got it from. There was no way it would have fitted in their van,” Kay said.
“I expect he conjured it. Look, Dad, it really is okay. The Blesses aren’t pixies.”
“They behave like ‘em.”
“Well, they’re not. They’re Alpenfee. They come from a totally different place over there, and these two were born in New South Wales.”
“Bet they were a riot at school,” Russ said.

Although only Johan played the flugelhorn, it’s pretty certain Hugo could play it too. The alp horn, cited by Kay, really would have been an alp horn. No wonder Russ was uneasy.

The Bless brothers and their unlikely musical habits appear in The Kissing Ring.