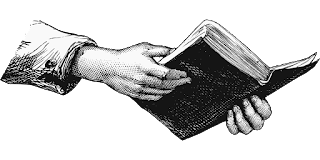 “Greet you, my daughter.”
The priest, old and upright with red hair streaked with grey, gave her a wintery twinkle and went on podding peas into a stoneware basin.

Priests and religion don't play a big part in my books, but that doesn't mean they're absent from the pages. Here's a selection from my oeuvre that contains added priest, bible (or church, or monk, and one beatific bishop...)

ANNA'S OWN:  Father Malley, an Irish priest of great benevolence and tolerance, marries Anna to Jack and then later rides out to baptise baby Mary. From my research it seemed many of the colonial priests and ministers wisely adapted their expectations to local circumstances. Father Malley is a catholic, while Anna isn't, but they have mutual regard for one another.

Christmas Eve:  The chapter titles of this one have carol names. I had sooo much fun working this one out.

Gold's Bride: Father Timothy Keely is a convict parson who tutored Jeremiah Gold as a child. He is quite happy to marry Jeremiah to Garnet. Sister Joseph is a frequent visitor who stays in the guesthouse though she doesn't actually appear in the book. Father Tim doesn't ask too many questions, which is as well, since Garnet and Jeremiah both believe the marriage is bigamous. It later devolves that Garnet's first husband, the horrible Ned Landis, had already been murdered... and not by Garnet. That was fortunate, as I don't generally let my heroines murder people.

Heather and Heath: The unnamed parson who marries Hector Campbell to Ness is nervous of Hector, but he has enough spirit to try to insist on the proper calling of banns. He doesn't succeed, (nobody ever succeeded when arguing with Hector) but he also offers Ness an out should she need one. His wife is kind and wishes Ness well.

In Kissing Cousins, the family bible fills in some ancestry gaps for Trina Garland, who is a descendant of Ness and Hector's great-granddaughter Rosalind Campbell and her husband Sam Garland.

The Kissing Ring, Sam and the Sylvan, Floribunda and the Best Men, Man Overboard etc: Master Rory Inkersoll is a priest who can also manifest as a cat. He doesn't drive, has no problem with marrying a willing woman to her two fiances in the same operation, and he keeps crystals in his cottage but he can quote the Good Book with the best of them. His favourite verse is the In my father's house one. He gives Jin Peckerdale an apposite verse when she asks him for guidance. Master Rory isn't an altogether comforting person, but he has a kind heart and, better still, he is practical and always takes the best course he can.
Looking Out for Sam: A Christian boy meets an agnostic boy with unpredictable consequences. Samaritan Brown's father is Reverend John Brown. Really. His rebellion against his ordinary name led him to bestow more interesting ones on his large family. They are called Marcus, Samaritan, Blaze, Branwell, Marietta-Louisa Jane, Merry Christmas and Petunia. Sam thinks Marcus came off best!

A New Broom: When Frederika purchased a ninety-nine year lease on a micro-vac from Tobias of New Broom Inc, she ended up in a vat of grapes. That was after a side trip that involved a beatific bishop, a cathedral and a fifty-voice choir dressed in cake-frill collars. The bishop patted her cheek and sent her rejoicing into her brand new life. A New Broom is a long short story in a collection called Dangerous Lovers: Roses and Thorns. It's a riff on the signed contract... and on vacuum cleaner salesmen.
One Weird Week: Father Tom Janus is the local minister. His daughter Evie is Justin's best friend. Father Tom carries out his duties with aplomb, despite the typically weird goings on in Bandinangi. He does his best to advise and support his parishioners as needed.

Replay: Brother Absolvus is the repellent monk who marries Aelfthryth to Harry. He probably wasn't in on the plot to murder Harry on his wedding night. One would hope not.

In Sunshower, Sofia Silver clings to the limp old bible she and Jessamine had shared. They taught Sam, Sofia's great-niece, the bible game, and gave her much-needed love and attention. Sam credits Sofa and Jess with such humanity as she had as an adult and remembered the bible game with affection. After Jess died, Sofia used the bible to store some treasured photos.

Taking a Chance: The old priest who marries Tom and Abigail Rimmer is both wise and tolerant. He remembers Abigail ever after as the midnight bride.

Translations in Celadon: Some of the action takes place at St Boniface's Catholic College where Sari Roberts and Suzanne Wise are not what one would expect of good Christian girls. Maybe that's because they're not.

Trinity Street: Some action takes place in St Saviour's; another Catholic College where Gerhardt Watchman is masquerading as a 20th Century teenaged boy, Camena de Courcy is battling the gaping division between her intellect and her social intelligence and Tell Clancy is trying to defend one of them from the other without knowing what is really going on.

In Wicked Rose, Lovely Rose the bushranger likes to do things right. She has developed a penchant for stealing the priest whenever she needs some churching. This story has one of my all-time favourite illustrations in it. It features the graveyard, some spooks, the priest, a gun...and Lovely Rose. Jan D'Silva captured the lachrymose moment perfectly.

So, there are priests, bibles and catholic colleges and such. There's only one nun, and she appears off-screen so to speak. I spent a delightful evening with the sisters at a convent in Deloraine some years ago. My old dad knew nuns from the same convent when he was a boy and held them in great respect. I really must add some nun to a book sometime soon. Then I'll revise this entry. 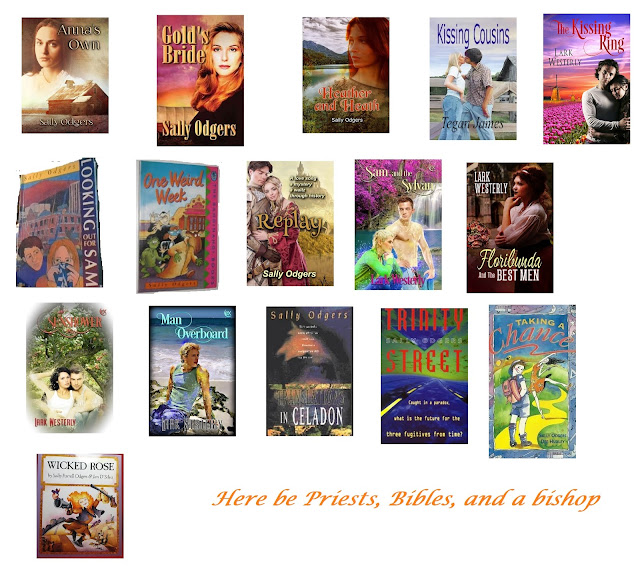