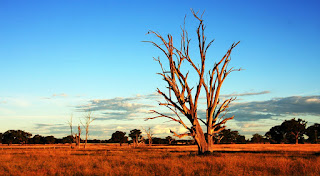 This is the Outback...

The Outback is an iconic part of Australia’s image. Even though most Australians live in urban areas, the outback is still there, as much a part of our collective psyche as Bondi Beach, Wave Rock and Nowhere Else. Where is it, though? That’s the question. Maps don’t show it.
Maybe the outback is as much a concept as a place. Maybe it’s an experience. I don’t live in the outback, but I have been there, sort of. I’ve adopted it as part of my world; the one I use in books.
Here are some of them.

In Beyond the Black Stump, Michael and Ben are driving cross-country with Ben’s brother Damien. The car goes wrong so the boys spend some time in the outback where they hear four bushrangers making plans. Maybe.

In Fool’s Gold, Abigail Reed returns to her childhood home; the outback town of Nugget Creek, and ends up in a complex game of identity, betrayal and salvation.

Hairy George sees Max, Mum and Aunt Jessica camel trekking in the outback. The trek is arranged by Case Travel, so they should have known better.

Despite the title, Rue isn’t really In Search of a Husband when she drives through the outback with her stepson-elect. Rosella and the property Golden Lode are in outback NSW and Queensland.

In Khloe Out of Arcady, (which I haven’t finished yet), Khloe Stephanotis lives in the outback town of Opal Dig. Khloe and her best friend Dimedes have an excellent reason for flying under the radar and they achieve it mostly by hiding in plain sight.

Matt the Mage is about Parramatta Wheatslump who lives with his parents Raelene and Merv and who wants to be a mage. That’s a pretty big ambition for a boy in the outback.

In Mix and Match, a companion to In Search of a Husband, much of the action is at the Top End and the Breona Belt. Jasper Diamond makes films, and often ends up in inhospitable places. Few are as inhospitable as the place he finds himself with his twin brother and his brother's fiancee.

O’Connor’s Last Stand is set mostly on Ballahoo Station, which includes a large chunk of the outback and a notorious outcrop known locally as O’Connor’s Leap.

Outback Lullaby shows the sweet face of the outback, in gentle verse and delicate pictures by Lisa Stewart.

Outback Rescue is set in the top end, where James Barnaby and his friends Stamp and Ace are off on a working holiday.

Pride Bridgeover-Sundown is not only set in the outback, but also in the Outback; an iconic and mythical place Glen Steele discovers by accident.

Sandstorm in a Sleeping Bag isn’t set in the outback, but at a distance education camp on the coast. The children who attend mostly live in the outback though.

In Swag-Dog, Tobor the swag-dog helps successive masters negotiate the perils of the outback.

Triple Treat, another companion to In Search of a Husband, is set partly on Dreaming Plains Station where the owner is setting up an outback experience.

In Visiting Day, Molly and Max are educated via Distance Education because they live in the outback. They’re a creative pair with a flair for the dramatic, so they embellish their compositions. That’s fine until they’re informed two of their teachers are – um – coming to visit.

There are several more books that might have qualified. These include the other books about James, Stamp and Ace and Bunyip’s Don’t, Defend the Dunny, The Bunyip’s Lair and Anna’s Own. However, though undoubtedly set in rural areas and the bush, I don’t think they qualify as outback. Heather and Heath certainly doesn’t, as it’s set in Tasmania.
Below are some covers... 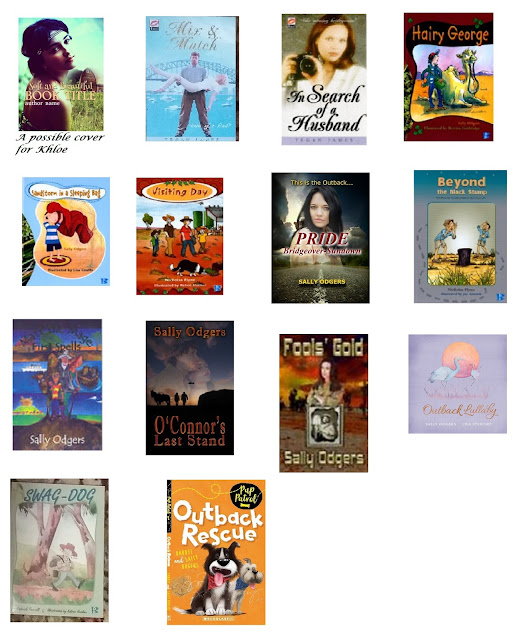