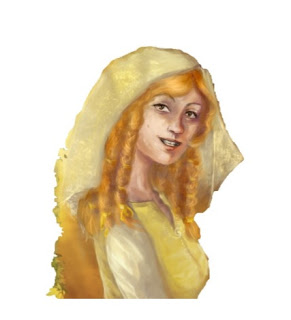 Source? Who knows?
Significance? Veils are mysterious, and so is Barbary
Fate? Ageless, changeless
Author’s inspiration? An interest in mediaeval clothing.

***
Barbary, clad in her gown  and her veil
Belongs to no man,  with no favours for sale

Barbary Lark is a mysterious young woman whom the villagers, and especially the young men, see from time to time. She wears her gown and her veil and she’s anything but shadowy as she goes about her business. She picks the natural harvest and makes up potions. She goes by the school and calls a cheerful good morning as she passes by. Everyone knows her but since she doesn’t age they find her unsettling. She’s touched by fairy blood and thus her clothing is quaint and old-fashioned. Barbary, like Enno with her frenched beret, never sees a reason to change. She just is.

Barbary and her veil cast their light-hearted sunshine in Myths of the Mind. In oeuvre terms she may be related to Genista dar Whin in the garlands of Thorn and May series. Barbary Chalk from that series shares her first name. It’s not a common one and seems to be a form of Barbara with a loose meaning of “stranger”.  Such a name coupled with a veil fits an enigmatic character.