"Have you heard that they hanged Moonlight and Kelly?" (James Galbraith - Heather and Heath)

Bushrangers, like pirates, highwaymen, dragons, spies and vampires, have a kind of glamour in fiction and tradition that they wouldn’t have in reality. Alone among that group though, these are an Australian icon. I’ve used them in at least ten books. Unlike dragons from the first “here be” post, bushrangers can’t be popped into any time period. They generally occupy a quite narrow space in the Nineteenth Century, though I suppose you might find isolated instances in the late Eighteenth and early Twentieth. To put them elsewhere or elsewhen takes a bit of ingenuity.
Of the ten bushranger books two are non-fiction. Tasmania, A Guide (1989 – 1997) and The Children’s Book of Australia (2000) both deal with Australian history and so bushrangers play their part.
Four more titles are historical fiction for adults. In Anna’a Own (1995 – 2018) Anna Kelly meets a desperate convict named Amos Hawkins  who scars her and kills her cow. He's a long way from the romantic highwayman type. In Captain Sunrise (2016) the titular character is a bushranger, although he’s a pest (being a disgraced gentleman) rather than an active danger. In Heather and Heath (2015 – 2018) a bushranger plays a small part when Jamie Campbell acquires a horse. In Gold’s Bride (2005) bushrangers burn down Jeremiah Gold’s house with him in it. Luckily there’s a cellar.
Dolphin (2002) is a children’s book set in colonial times. In it Dolphin, the convict maid, routs Bad Jack the bushranger with some creative cooking.
Wicked Rose is a picture book, also set in colonial times. Wicked Rose is a faithful wife, a loving mother… and also a bushranger.
This leaves Beyond the Black Stump (2002), and Pride Bridgeover-Sundown (2007 - 2017). One is set in 2002 and one in 2027 so how can there be bushrangers (unless it’s a Mad Max deal which is isn’t)? In Beyond the Black Stump, Michael and Ben hear four bushrangers making plans. Well, maybe. There is a history festival on but there are anomalies the boys may never work out. In Pride Bridgeover-Sundown Glen Steele is driving the Outback Highway when he arrives in a town that’s not properly on the map. There are bushrangers about, but then, there are also drovers, squatters, ANZACs, ghosts, explorers—and animals that ought to be extinct.

So that's the ten bushranger books. And that's the fifth of the Here Be posts which will intersperse the character, book, place, naming and object posts and what have you. 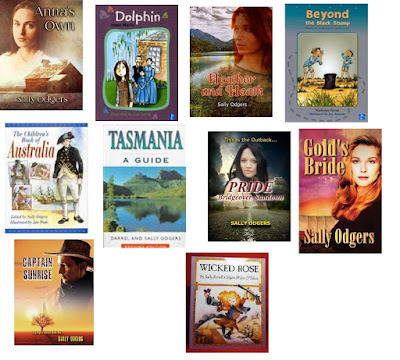