Queen of Tarts! I intended to write a shortish book, making it one of four titles riffing on cards...Who knows why- must have seemed a good idea at the time.

Anyway, I went for it when the opportunity came to write a Halloween story. I named my heroine- Queenie Hart, and afflicted her with what she calls the Caledonian Curse, in that, every October, her speech and thought patterns get taken over by a cranky and highly suspect Scotswoman. Queenie doesn't want, or like to burst into a flood of Gaelic or, worse still, cod stage Scots invective when anyone annoys her, but there it is- come October, that's exactly what she'll do.

The Caledonian Curse has lost her jobs, friendships, boyfriends and is about to lose her the unit she has lived in by default since moving in with a work friend who subsequently moved out. It's not all about loss, either... it can also be about cost, as Lassie Haggis, as Queenie eventually dubs her extra personality, has a penchant for online shopping for everything from a round trip to Scotland to a case of Islay Malt and a bagpipe serenade. It's possibly unfortunate that Lassie Haggis is in control when Queenie encounters James Stuart (not the king or the actor) at Circular Quay...

I had a wonderful time writing Queenie's story but, par for the course, it went long. Eventually, it went TOO long for the publisher who had taken it on. Therefore, I split the ms into Queen of Tarts 1 and Queen of Tarts 2. The first one ends on the edge of October, with a sinister rustling in the belfry. The second ones ends on the night of Halloween. Q#1 came out in October. Q#2 will be out in late November. Having left Queenie in a position where she's solved her most pressing problems, I realised there was still more of the story to tell. Therefore, I wrote Queen of Tarts 3, subtitled The Twelve Tarts of Christmas. (Did I mention Queenie is a baker?) In this one, most of the remaining mystery is unraveled... It comes out in late December. I had a wonderful time with bats, The Belfry, a rackety 96-year-old landlord, a grumpy landlady, a load of fairies, tarts, a basket of childhood, a mysterious painting, a bus called Ethel... anyway, it was all enormous fun.

Oh, and naturally, I needed to know what happened to the grumpy landlady, Angel Petty, and to her new tenant, Penny Bunn, and so I wrote One Hundred Roses which comes out in February. I badly wanted to write Ninety-Nine Shamrocks for St Patrick's Day, but my computer crashed. Maybe next year. 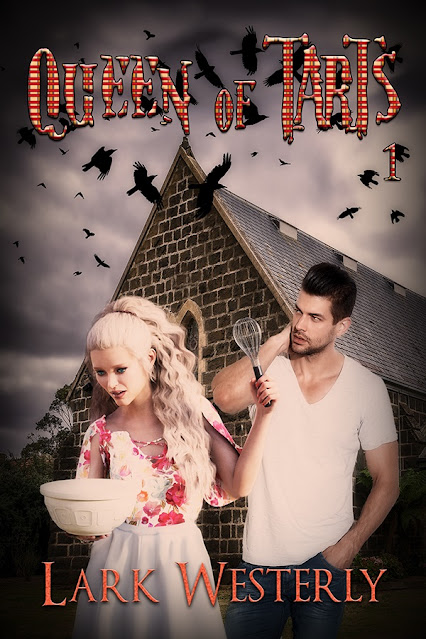 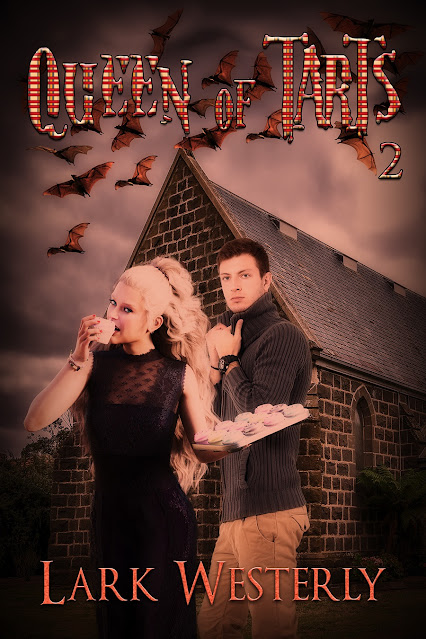 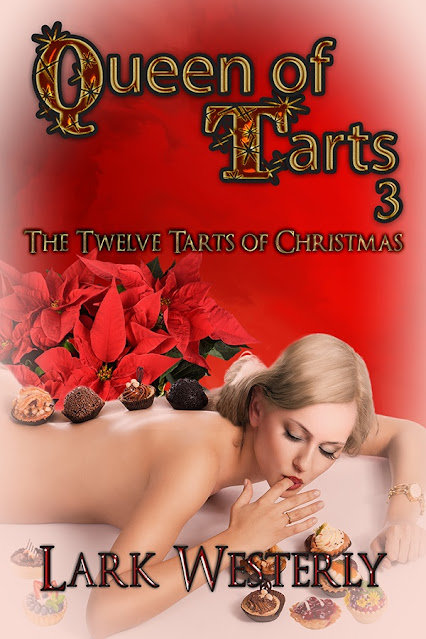 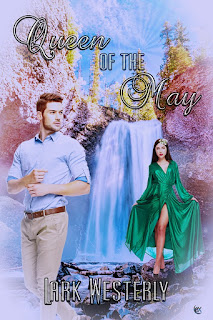 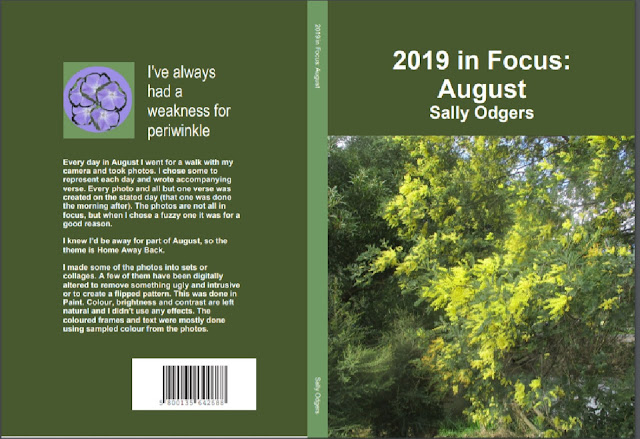 Every day in August I went for a walk with my camera and took photos. I chose some to represent each day and wrote accompanying verse. Every photo and all but one verse was created on the stated day (that one was done the morning after). The photos are not all in focus, but when I chose a fuzzy one it was for a good reason.

I knew I’d be away for part of August, so the theme is Home Away Back.

I made some of the photos into sets or collages. A few of them have been digitally altered to remove something ugly and intrusive or to create a flipped pattern. This was done in Paint. Colour, brightness and contrast are left natural and I didn’t use any effects. The coloured frames and text were mostly done using sampled colour from the photos.

I managed to contain the size to 149 pages this time; let's hope I can keep September to a reasonable size too!

Jigsaw Cards Remade
Well, they never did turn up, so I remade them using three sets this time...
Here are a few samples.
Pick one from each set to get an idea.

Ideas:
I want a strange hat...
Looking for a flying statue
Discovering an inky cake...
Posted by Flora at 22:41 No comments: 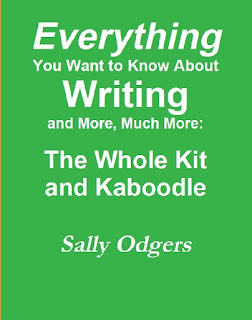 Jigsaw writing... I'm holding some workshops in Townsville next week and (naturally) I can't find my jigsaw writing cards. I'll have a look in a few more places, and then probably give in and make some more. This time, I might try three different cards rather than two,  and make one set all objects, one set all subjects and one set all modifiers. Wish me luck!
Posted by Flora at 10:06 No comments: 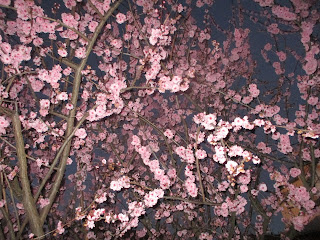 This photo was taken in the dusk looking up through blossom. Interesting effect... It's the kind of thing that inspires thoughts and makes you look at things differently
Posted by Flora at 23:09 No comments:


"Peter, can I tell you something I’m scared of?”
“Bogles?”
She giggled. “Not while I have gingerbread in my pocket. Currie says if I ever see a bogle it’s probably someone with a bogle manifest, and gingerbread is bound to help.”
“It works on goats,” Peter G remarked
Posted by Flora at 14:18 No comments:

I'll be beginning work on Pearl 8 soon. I have an idea to use a different setting.
So far, we have books set mainly in the meadow, on the cliffs and an island, partly on a snowy mountain, in the forest, at Ogrefest, Big Rock and near the pond. The Kingdom, where all the stories take place, has lots of different landscapes and next time I rather like the idea of a desert.
Posted by Flora at 23:42 No comments: 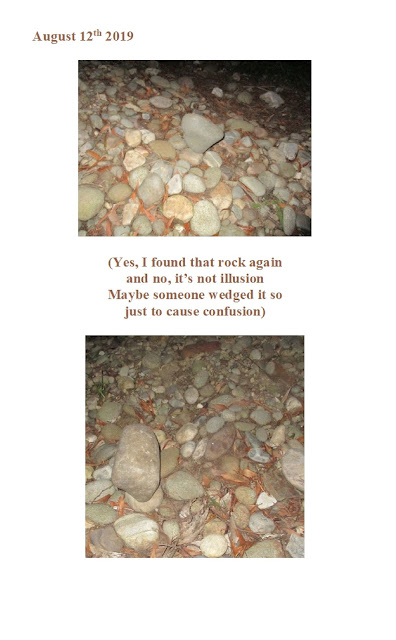 I saw the weirdest thing in one of my photos a few days ago. I didn't see it in situ, just later, when I went through my pictures. It was so odd, I went back today for a look and there it was... the gravity-defying rock.
I wonder what the story is behind that one?
Posted by Flora at 23:13 No comments: