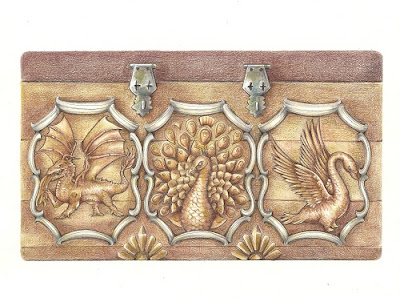 The dragon is a gigantic reptile from the very dawn of time.

Okay, so that's a firedrake, a peacock and a swan in the picture. But that's rather the point. A firedrake is a kind of dragon as Cat Mahal discovered in The Peacock's Pearl. This post is about dragons in my books. As anyone following this blog knows, I've written a lot of books, and quite a few contain added dragon. Here are some of them...

The Dragon's Coming After You (1994). This is a rhyming educational picture book with the refrain The dragon's coming after you. He's coming in a...

Fantastic Creatures (2009) is a picture book done like a bestiary. It's beautiful. It has a dragon.

Candle Iron (2001) is a fantasy novel with a creature that calls itself a gemdrake. Make no mistake. It's a dragon. It is also known as the Keeper.

Kallie and the Fishermen and Kallie Fetches the Dragon (both 1998) are about Wizard's apprentice Kallie and her encounters with the wizard's recalcitrant dragon.

Wiley Tyler: The Silver Skateboard (2016) has a lady dragon named Nessa Copperdell in it.

Knightfall, Knight Protector and Knight Triumphant (2002, 2003, 2004) have several dragons: notably Peggy the pearly dragon who is the prettiest and most alarming of the tribe. Also you can meet King Fleamer, Prince Rifer, Michael Firebug and  Ruby who really wants to feed Simon Knight to her chicks.

The Lonely Dragon (1997) is a reading scheme story about an unnamed dragon.

So that's the seventeen dragons. And that's the first of the Here Be posts which will intersperse the character, book, place, naming and object posts and what have you. 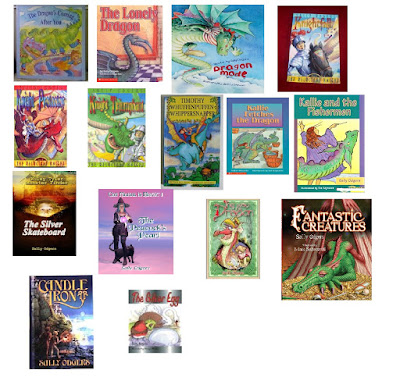