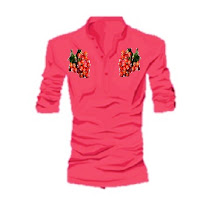 Source? Skye Bakewell made it, ostensibly to please her imperious daughter, but really because she felt a motherly qualm
Significance? The shirt gave Zach good luck and eventually saved his life
Fate? Jisinia Peckerdale took a liking to it and appropriated it—and Zach—but it’s likely they share it these days
Author’s inspiration? Haven’t we all had a garment that just made us feel good?
Appeared in? Man Overboard and, retrospectively, in Honey and the Harvest Hob

Honeycomb even produced a dark red shirt for him to wear. Her mother had whipped it up when she made the dresses, she told him. He could wear it or not and he could keep it or give it away.
Give it up? Never. He still had it. It was his magic fairy shirt and he wore it for luck.

When Zach Rowan was small, his great-grandmother Shoshanna Rowan told him about fairies. She died before she could arrange the trip through the gate to over there that she’d promised him, and Zach soon learned not to mention what she’d said. Nevertheless, when he went to college he was enchanted to meet three young women whom he came to call his Blue Moon girls. Honeycomb Bakewell, the one he dubbed his fairy queen, really was a fairy. The irony was that she didn’t know it at the time. The second, the dark and exotic Asha Levi, was his Persian princess. She was neither Persian or a princess, but that was the way Zach thought of her. The third was Mab O’Mara, his gorgeous girl next-door. Zach screwed up his courage and invited Honey to the school formal. She turned him down, but kindly, and suggested he should try Mab. He effectively went with all three girls, and it was the high point of his life to date. Honey’s dressmaker mother produced three lovely dresses for the girls; amber for Honey, green for Mab and sapphire blue for Asha. She made a dark red shirt for Zach.
What none of the young people knew was that she’d imbued the shirt with a cuddle-me charm. As she explained, years later, when Zach was missing, overboard, presumed drowned…

“I don’t think I ever told you this, but I worked a cuddle-me charm into that shirt,” Skye said [to Honey].
“You. Did. What?”
Skye looked defensive. “I had to do something for the poor lad. You girls were treating him like a puppy on a string.”
“I didn’t have an urge to cuddle him.”
“It wasn’t meant to affect you, darling. That would have been unethical. It was a universal cuddle-me. It wasn’t meant to attract girls, just to keep him safe.”
“Why would you do that? You hardly knew him.”
“I know his mother slightly. And what you girls were doing could have made him unhappy if he took it seriously. I know you didn’t mean it, but the three of you were quite formidable. A cuddle-me charm just let him enjoy the attention and feel good about himself. It stopped him from feeling used when you dropped him.”
Honey shook her head. “I know I wasn’t…oh Skye, you’re hopeless.”
Later, Honey asked her mother if there was anything that could help Zach.

“The only thing I can think of is—if he was wearing that shirt. It might… just might…bring him to a bit of flotsam.”
“Why the hell would he still be wearing a shirt he had for a college dance?”
“Why not?

As it happened, Zach did still have the shirt and he still wore it when he needed a bit of confidence. He was wearing it when he dived off the party boat PitchPerfect in an effort to save a bride-to-be. The fay charm worked into it gave him the only bit of luck it could, allowing him to enter an underwater gateway that would normally have been closed to him. The ensuing adventure would have been memorable if Zach hadn’t forgotten it, but once again the shirt intervened in his favour.
Invited to a Christmas party aboard a yacht, he encountered a stranger, wearing a familiar dark red shirt. He mentioned he’d once had one the same colour and asked where she got it.

Jin said slowly, “Believe it or not, I found it in a boat.”
“Not a yacht called PitchPerfect was it?”
“It was a dinghy.”
“So you…”
“Appropriated it. Yes.” She caught his reproachful gaze and said defensively, “It couldn’t possibly have been Robin’s. He’s enormous.”
“Robin?”
“He’s married to one of my distant cousins. It was his boat.”
“It suits you,” he said.
“It would suit anyone. It’s a cuddle me!”
Great Bogle! She hadn’t meant to tell him that.
“Um?” He took a step closer.
“A cuddle me. That was probably why I…”
“Appropriated it? What’s a cuddle me?”
She wrapped her arms around herself. “It means this shirt is imbued with a cuddle-me charm. You might call it good luck or protection.”
“Do you think mine had one too? That would explain why I always felt good when I wore it.”
Jin sighed. “I think this probably is yours. Obviously, I’ll give it back.”