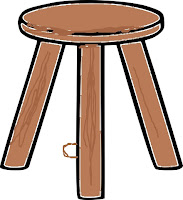 Source? It was probably handed down from a grandmother

Significance? Eileen was sitting on it when Sean arrived so at first she saw only his kilt
Fate? No doubt it will be handed on to the next generation
Author’s inspiration? They’re traditional for hand-milking cows
Appeared in? The Courting of Eileen

She stripped the last of the milk, patted the dappled cow and pushed back her stool.

Eileen’s brother Keiran wanted her to be happy. In his mind, this meant matched with a good man. After all, he had his lovie Tally and had never been happier. Eileen wanted someone to love, too, but she had a problem. She was so tall most of the leppy gossoons would have to stand on a bucket to kiss her.
Sean McTavish was the last of the McTavish laddies to be unmatched. His problem was that outwardly he was a braesider, but he saw himself as a leprechaun. The braeside lassies found him confusing, but the leprechaun colleens were all so small. His brother Hamish met up with Kieran Shamrock and together they hatched a plan.
Eileen was mortified and Sean was not hopeful, but what had they to lose? Sean came to visit. Eileen was milking at the time…

She could never say afterward just when she knew someone was watching her. It gradually dawned in warmth on the back of her neck as if she’d piled her hair and let the sun shine there. She continued to milk, but the feeling became irresistible. After a bit, she said, “If that’s you, Kieron Shamrock, take heart. You’re quite forgiven. You did no more than act as a decent brother would.” The silence continued, so she said sharply, “Don’t loiter Kieran! You’ll put Cushy off her milk.”
Someone moved up to stand beside her, and a voice said calmly, “Top of the noon to ye, Eileen o’ the Mist.”
Eileen’s hands went on drawing down the milk in rhythmic spurts, but she tilted her head to the side to see a pair of sturdy legs and the hem of a kilt. She followed her gaze on up. That was not her brother. The man was bigger than any leprechaun she’d ever seen. He was bigger than most humans.
“Top o’ the noon to ye, laddie,” Eileen said. She stripped the last of the milk, patted the dappled cow and pushed back her stool. A large hand took possession of the bucket and swung it up to rest safely on the shelf. Eileen got up and shook her skirts, putting herself to rights before looking again at her visitor.

Eileen’s stool wasn’t the only one in Shamrock village. Her niece Ashling, Kieran’s daughter, used one to rest her foot on while playing the fiddle at the céili where Eileen danced with Sean.

Eileen and her milking stool appear in The Courting of Eileen


ABOUT THE BLOG
Sally is Sally Odgers; author, anthologist and reader. You can find you way into her maze of websites and blogs via the portal here.(Sally is me, by the way.)