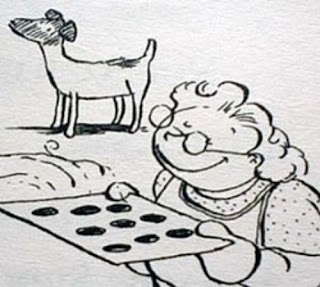 Source? No doubt Auntie Tidge got them from her optometrist
Significance? As a lady of a certain age, Tidge had every right to wear glasses.
Fate? Frequently knocked sideways by Jack Russell, they probably had to be repaired now and then
Author’s inspiration? Leaping dogs often knock my glasses sideways
Appeared in? The Jack Russell series

‘See you Jackie Wackie.’
Auntie Tidge is the only person alive who can call me that.
I slurped her cheek and knocked her glasses sideways. She loves it when I do that.

Theresa “Tidge” Russell was Sergeant Russell’s aunt. She lived nearby when Sarge was stationed in the city. When he transferred to the country, she was sad to see him, and his dog Jack, leave. Jack felt the parting keenly, and he was delighted when Auntie Tidge moved to Doggeroo.
Auntie Tidge soon integrated into the local community, joined the CWA and involved herself in all the doings. She adopted the street dog, Foxie, befriended Caterina Smith, and set to work to develop a line of healthy home-made dog treats which she later marketed as Tidge Treats.
Jack and she always greeted one another affectionately, which tended to knock those glasses sideways…

‘Auntie Tidge!’ I yelped. I shot across the floor and launched myself into the air. (They don’t call us Jumping Jacks for nothing.)
Auntie Tidge caught me. (She’s had a lot of practice.) ‘Who’s a lovely boy then, Jackie Wackie?’
Foxie gave me a look under his eyebrows. ‘Jackie Wackie?’
‘Call me that and die,’ I snarled. I gave Auntie Tidge a big slurp up the cheek and knocked her glasses sideways. She loves it when I do that.

Just as he reached her, Auntie Tidge tripped over Foxie and dropped the whole huge ham. Of paws, Foxie made a dive for it. Sarge got there first and caught it just before it hit the ground. ‘Quiet Foxie!’ he yelled. ‘Are you all right, Auntie?’
‘Yes dear,’ said Auntie Tidge. She put her glasses straight. ‘The butcher’s van makes Foxie forget his manners.’

Auntie Tidge's glasses appear in the Jack Russell series. The illustration is by Janine Dawson.

The goal for 2017 was to write a post a day profiling the background behind one of my books; how it came to be written, what it's about, and any things of note that happened along the way. 2017 is well behind us, but I ran out of year before running out of books. As of June 2018 I STILL hadn't run out of books, but many of those still to come are MIA by which I mean I don't have copies and remember little about them. There are more new books in the pipeline, and I'm certainly showcasing those, but in between times, I'm profiling some of my characters, places and objects. Thank you so much to everyone who's come along on this journey so far!
Posted by Flora at 08:53