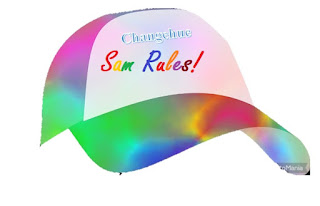 Source? Sam got it from a designer in exchange for some photos
Significance? It was something Sam loved but parted with in search of a bigger score
Fate? Unknown, but Alleypuss may have got it back and kept it
Author’s inspiration? It seemed a likely thing to have by 2020
Appeared in? Shakedown

I’ve got ragged-looking straw-coloured hair and freckles and those fade-away eyebrows surfies often have. Good eyes; dark and direct and honest-looking, and a chin with a little cleft in it. (The Rabbit would kill to have my chin. His own is a Queen Victoria special.) Broad shoulders, a mole on my cheek and a funny thumb. An anchor-shaped scar on my wrist. (My own early attempt at tattooing. Alleypuss was really pissed off.) That’s me.
That’s Sam Cool.
Until part-way through the Shakedown, I also had my changehue Sam Rules cap. It was a real top grade, made of that cloth that changes colour with the temperature or when it gets wet. I used to wear it all the time, except in the water or in bed. Alleypuss hated it, and so did The Rabbit, but I wasn’t about to leave it off to please them. I’d got it off a designer in exchange for some publicity pics I’d taken for his portfolio.

Sam Cool wanted to have it all and now. When Sam wrote a book called Joe Cool’s Adventure Book, Logo Books turned it down. Sam was furious. Celebrities got books published. So did idiots who’d got themselves into trouble… Sam decided on a shakedown of monumental proportions, a convoluted and difficult hoax. To the world’s eye, teenaged Sam Cool vanished, and reappeared weeks later, emaciated, having been stranded on Miracle Reef. The result was a best seller – Miracle Reef: The Sam Cool Story – published by (yes!) Logo Books! So, what really happened? Was Sam really stranded? Well, yes… but that came later. First of all came the brief and convincing existence of Alex Morgan.
Of course, a good disappearance needs clues…

By January 2nd this year, I was wishing I’d planted a few clues for them, since they seemed so clueless on their own account. It would’ve been easy to have staged a drowning or a suicide; all I’d’ve needed to have done was to dump my clothes (including Sam Rules) [the changehue cap] on the beach, just above the tide mark. It would’ve been a wrench to part with Sam Rules, but it would’ve been a convincing bit of evidence.

Eventually, Sam did part with the changehue cap, after spotting a poster…

HAVE YOU SEEN SAM COOL?
Anyone having information of the whereabouts of Sam Cool is invited to contact Robert Cool on Vidfax Code 50087.  A reward is offered for definite news of (or information leading to the recovery of) this person.
Sam is sixteen years of age, 163 cm tall, 65 kg, and of athletic build.
Hair, sun bleached, eyes dark, cleft chin.
Distinguishing marks; anchor-shaped scar on left forearm, mole on right cheek, bent right thumb.
Last seen wearing faded shorts, blue shirt, blue trainers, a skull ear stud and a cap inscribed Sam Rules.
I decided…it would be too risky to ‘discover’ the Sam Rules cap the day after we’d seen the poster. Far better to ‘discover’ it later today…
I… hitched north towards Mangrove. Once I got within 20 km of Alleypuss’s place, I took Sam Rules and rolled it in some mud then shoved it into a storm drain, with a bit sticking out. Then I high-tailed it to the nearest public phone and dialled The Rabbit’s code.
I thought he might recognise my voice, even if I disguised it, so I faxed him instead, writing the message with my left hand.

Dear M Cool,
I saw one of the posters you put up. I saw a changehue cap with Sam Rules on it yesterday in a storm drain just past Servo 10. I was going to take it, but it was dirty, so I put it back. Is that the one you want? If it is, please post the reward (cash order) to me, Jay Garvey, in care of the Brisbane P.O. by January 20th.
Yours sincerely,
J. Garvey

Hopes raised with the January discovery of a cap positively  identified as belonging to Sam Cool were later dashed when the M Latimer, Commissioner of Police called off the search.

Soon after that, Sam staged Operation Come-Back, wrote the book, and enjoyed celebrity until December 31st when it all ended with a bang.
Meanwhile, Sam Cool’s confession was stored safely away until it was found two hundred years later who decided it really needed to be suppressed… in the family’s interests. After all, surely Sam would have come round to that way of thinking eventually…