Source? The Provosts of Shiva wore robes identical to the burnous worn by 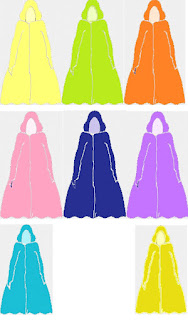 Significance? The solid coloured robes made it easy to identify a Provost
Fate? They still wear them by the end of Book 6
Author’s inspiration? Easily identifiable as uniforms
Appeared in? Elydian Dawn series

Diya, expecting at last her treasured daughter, was awed to receive a visit from six jewel-bright figures draped in colours of lemon, lime, blueberry purple, rose pink, lilac and tangerine.

The Provosts of Shiva were Terrans who acted as regents until the Citizens grew to their majority. That was the plan, anyway, but by the end of New Dreams, the third book in the Elydian Dawn series, this idea had been shelved… for now. Since the Provosts were governors and upholders and administrators of the law, they needed to be ubiquitous and highly visible. This they achieved by adopting brilliantly coloured robes in place of the regulation white burnous. The colours were initially lemon, lime, blueberry, lilac, rose and tangerine. Ostensibly, there were six Provosts, but in fact there were six different people rotating in each colour, making thirty-six in all.
The Provosts’ bright colours served to disguise the fact that there was more than one for each colour as they took shifts. They also made them easily identifiable for anyone needing assistance. Finally, the brilliant colours removed any suspicion that the Provosts were carrying out covert spying… though of course they were.
In New Dreams, a seventh colour was shown when an impartial adjudicator was brought in. This one wore a gold robe. Someone else dressed as a provost in a turquoise robe but was not a provost. In later books, the colours raspberry and skyblue, fuchsia and cedar were added to account for the growing population.
Provosts wore colour-coordinated shoes to help hide their everyday identity, and used voice modifiers. Even they were not supposed to know one another’s identities, and if they did, as Kat Lund, one of the Roses, find out, they kept quiet about it.


The Provosts appear in the Elydian Dawn series. You can read more about it here.