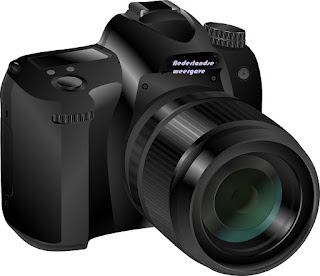 Source? Marieke probably bought it in Launceston… or maybe she got it duty-free on a trip back to the Netherlands.
Significance? It disconcerted Tom when he realised she was planning to use him and Ryl for publicity photos
Fate? Marieke, being a thrifty Dutchwoman, probably still has it
Author’s inspiration? It seemed a good idea at the time…
Appeared in? The Kissing Ring (2018)

Marieke took charge. “Tom, you’d better wear that pullover for your photo shoot, but Ryl, can you get out of the overall? It’s not the look we want to promote for Kleine Nederlanden. Industrious, yes, but tonight we need romantic. I’ll be right back, so get ready now.” She swept off, setting the bell jangling as she left.
“What photo shoot? And why didn’t I hear that when she came in?” Tom wondered aloud.
“Yes, why?” Ryl demonstrated the why, which led to another why... why they weren’t ready when Marieke returned, armed with a scarily-huge camera.
Tom eyed the phallic-looking lens with apprehension, especially when Marieke patted it lovingly.

Marieke Merriweather arrived in Tasmania as a Dutch backpacker in the 1960s. She met Dennis Merriweather and decided to stay. Although she’s been in Tasmania for two decades by the time of The Kissing Ring, she remained resolutely Dutch, and accentuated it by running a tulip farm called Marieke’s Klein Nederlanden. When Tom went to help out while his cousin Bart was away, he found to his delight that his girlfriend, Ryl, was working there during her swot vac.
Tom and Ryl, a loving young couple, were exactly what Marieke wanted to photograph for her publicity campaign, so she wasted no time in bringing out her big camera.

“All right, you two, act in love,” Marieke instructed, surging to a halt amid some brilliant pink tulips.
Since she was peering through the huge camera, it was difficult for Tom to make out her expression.

Tom and Ryl complied, but they were reminded that this was just a week, and it would be a while until they could be together again. Marieke got her photos, but it soon devolved she thought their relationship was a little more advanced than it was…

“Smile, Tom!” Marieke instructed, but Tom, despite his joy in holding his love again, found melancholy overtaking him.
“Smile,” Ryl whispered, and tucked her head in against his shoulder.
“Smile,” Marieke urged, clicking away. “Denk aan seks!”
“Does that mean what I think it means?” Ryl murmured in his ear.
“I expect so.”
“How can I think of something I’ve never done?”
“Don’t say that!” he whispered.
After that, Tom began to see the funny side of things.
He still hadn’t much clue what they were doing or why they were doing it, but lying down among the thick ranks of flowers with Ryl’s head on his shoulder, denken aan seks with the gigantic lens prying down at them from above had a peculiar fascination…
…It was coming into dark when Marieke finally admitted defeat by light-lack and swept her two photographic models back to the house.

Marieke was goodhearted if managing, and she later agreed to a private photoshoot for Ryl, who wanted a special photograph for Tom’s upcoming birthday… That scene isn’t shown, but Tom sees the evidence of it on his birthday morning, having said goodbye to Ryl to day before.

It opened out into a double photo frame. On one side was a two-inch print of a picture from the photo shoot Marieke had done the day he arrived.
He saw now why she’d kept telling him to smile.
On the other side was a picture of Ryl, alone. She was topless, smiling into the camera with her shapely hands crossed demurely over her breasts. Her kissing ring glinted in the sunlight, and she was framed by a mass of tulips, the colours blending with her rainbow.
So, that did come out in photographs. He’d wondered.
Tom smiled.

Marieke and her camera appear in The Kissing Ring. She is referenced again in Man Overboard

The goal for 2017 was to write a post a day profiling the background behind one of my books; how it came to be written, what it's about, and any things of note that happened along the way. 2017 is well behind us, but I ran out of year before running out of books. As of June 2018 I STILL hadn't run out of books, but many of those still to come are MIA by which I mean I don't have copies and remember little about them. There are more new books in the pipeline, and I'm certainly showcasing those, but in between times, I'm profiling some of my characters, places and objects. Thank you so much to everyone who's come along on this journey so far!
Posted by Flora at 08:07