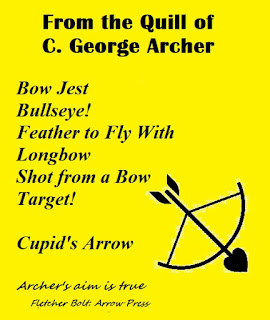 Significance?  It gave George a chance to display his puns in public
Fate? No doubt displayed at 13 Moon Street, Bandinangi
Appeared in? The Bandinangi Books
Author's Inspiration? I’ve always liked punning titles and books with patterns

***
I was eating a jam sandwich when I saw Dad’s new book on the table. It was called Bow Jest.

C(arey) George Archer was the son of Charles and Blossom Archer, husband of Mellie, and the father of Justin, Rachel and Jeremy. Also sharing his household were his parents-in-law John and Juliana Case, their son Harrington and Harrington’s fiancée Lorelei. There was also Peabrain the dog, Venus the Vegetable Vampire and Freda Fiend Fern. This large and lively household was one reason George wrote so many books.
He favoured punning titles, which included Arrow of Fate, Feather to Fly With, Shot from a Bow, Bullseye!, Longbow, Target! and Bow Jest. He was also responsible for at least one play, Cupid’s Arrow, which featured in the book One Weird Week. George’s books never reliably hit the best seller lists, but he put a lot of work into them, and what with translations and various reprint editions, he had enough to make an impressive shelf.