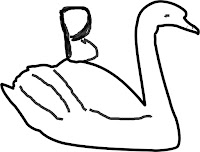 Source? Pen and her husband Ben worked together as illustrators, one of them inking and the other shading. They signed their work with a joint logo
Significance? Because of the lag in publishing, Pen had to see the joint signature on newly-published books for two years after Ben’s death
Fate? Pen stopped using that signature when Ben died
Author’s inspiration? I’ve always wanted a fancy punning signature
Appeared in? Pen and Ink

The lag between his last pictures and the publishing time-frame meant books continued to arrive in the post with their joint signature on each illustration; a tiny swan supporting a stylised capital B with the upper bowl done darker so it was obviously a capital P as well.

Pen continued the work alone, taking over the inking Ben used to do, but her solo work was signed with just the swan and the capital P.

Maybe she should come up with a new logo—a female swan which was also, as Peck had noted, a pen.

Pen had been widowed for some time when Duffy Inkersoll proposed to her.

She blinked. “I’ve been Pen Swan for a long time.”
“You can stay Pen Swan if you like. Or you can be Pen Inkersoll.”

Pen decided to change her name, but Duffy, who was starting an enquiry agency, had some ideas too…

“Inkersollutions… “You could always join me. We’d be Inkerpen, not to be confused with Interpol.”
“Pen and Ink Inc.”
“Hey! I like that. Seriously?”
“We’ll see.”

Pen’s new signature was probably somewhere along the lines of Pen and Ink and although Duffy wasn’t an artist he had a very personal contribution to make to Pen’s work.

Pen and her signature appear in Pen and Ink