Source? It was presumably bought by someone in the household 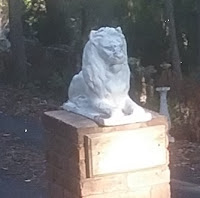 Significance? It was partly responsible for Anna Bailey’s one-way trip on a convict ship
Fate? It broke and though probably kept for evidence, it would have ended up thrown away
Author’s inspiration? It was based on one my grandmother had.
First appearance? Anna’a Own

Anna turned and finished sweeping out the hearth. She tumbled the ashes into the ash-pail and rubbed up the metal surround. Then she wiped the fine ash dust from the mantel and flicked a duster over the alabaster lion which stood there. It was a handsome piece of statuary, but right now its lolling stance reminded her of Mr Hubert.

Anna Bailey’s joy at being chosen as Miss Verity’s lady’s maid was spoiled when Verity eloped, leaving Anna with a present and a dangerous secret.
Anna was back at her ordinary duties when Mr Hubert Sutton, Verity’s horrible brother started tormenting her. Anna failed to fight him off but his final insult is just too much.

Some thread of control snapped in Anna. Whirling to the fireplace she seized the alabaster lion from the mantel and flung it at Mr Hubert’s head. Her aim was poor and the statuette went wide, but it did startle him and he took a pace backwards, pitching over the ash bucket.

Mr Hubert cracked his head on the mantel, and Anna ended up accused of theft and attempted murder.

“’Official complaint—stealing; two counts. To whit—one brooch (cameo type) valued at such and such, one watch chain, (gold), valued at I dunno many more. Assault and attempted murder, with a blunt object, to whit, one alabaster lion, resulting in damage to the person of Mr Hubert Sutton, Number 15 Peel Square, Lunnon,’” he read mournfully. “Doesn’t look too good, Miss.”

Anna pleaded not guilty, but to no avail.

“You did not strike down Mr Hubert Sutton with a ...” The judge glanced down to consult a paper. “... with a marble statuette of a lion?”
“No sir, I did not.”
“Yet this same statuette was found broken on the floor next to the victim. How do you account for that?”
“I—I threw it at Mr Hubert, sir, but it did not hit him. He stumbled over the ash bucket and fell against the mantel.”

After serving her sentence in Van Diemen’s Land, Anna attended a dance where she met “Mad” Jack Kelly, a happy-go-lucky Irishman. She told him her status…

“Quite sure,” said Anna. “I am no thief, Mr Kelly, nor even have been, and I did not strike Mr Hubert. However, I did attempt to offer him violence. I threw a stone lion at his head, but I missed. The real damage was done by the ash bucket and the edge of the mantel.”

Kelly was sympathetic and later, when Anna explained further, he evinced a wish to thrash “the spalpeen”. The last heard of the lion was on the night of Anna’s wedding, when her new husband asked…

Anna turned startled eyes to find him decently clad in a flannel nightshirt. Bending down, he turned back the sheet and climbed into the bed beside her. “Mrs Kelly,” he said solemnly, “I have a serious question to put to you.”
Anna eyed him doubtfully.


“Have you, or have you not, concealed somewhere about that fetching nightgown, a marble lion?”

The goal for 2017 was to write a post a day profiling the background behind one of my books; how it came to be written, what it's about, and any things of note that happened along the way. 2017 is well behind us, but I ran out of year before running out of books. As of June 2018 I STILL hadn't run out of books, but many of those still to come are MIA by which I mean I don't have copies and remember little about them. There are more new books in the pipeline, and I'm certainly showcasing those, but in between times, I'm profiling some of my characters, places and objects. Thank you so much to everyone who's come along on this journey so far!
Posted by Flora at 08:30