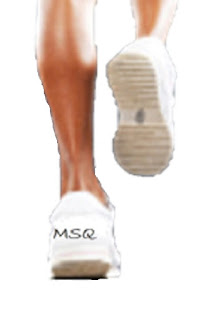 Source? The Mercury Shoe Company gave them to Miriam as her sponsor on her quest to run from Hobart to the tip of Cape York
Significance? The sponsorship allowed Miriam to keep on running
Fate? Harry Mercury made sure they were replaced as needed
Author’s inspiration? The right shoes are vital for running long distances, and I wanted a link-relationship for Miriam
Appeared in? Wilderness

The fronts of her shins were sore as well, despite the soft cushioning soles of the Quicksilver running shoes.

Miriam Moses had just finished chemotherapy for her cancer and she wanted to do something interesting with her life. Not even waiting for the final test results, she took off on her quest to run from Hobart to Cape York.

Miriam was grateful for those shoes. She was very grateful to the Mercury Shoe Company for sponsoring her. She might have blisters now but that was because of the socks she hadn’t been wearing. She’d have been much worse off in her holed old joggers. She’d have been crippled for days if she’d worn her holed old joggers.
“We’ll be picking you up from time to time for interviews,” Harry Mercury had said diffidently when she collected them. “And we’ll ask you about your shoes.”
“Am I obliged to say something complimentary?” said Miriam.
Harry looked down at her small figure, her pale, pointed face and her dark, bright eyes. She didn’t look pitiful, but he felt his guts twist like a clenching fist. He didn’t know this girl, and now he never could. “It would be a help, Miss Moses,” he said coolly. “Since the point of our sponsorship of you is advertising our product.”
“Is it?” said Miriam. “I thought the point of your sponsorship was the recognition of a job worth doing.”
“Touché,” said Harry. “Perhaps there are two points to our sponsorship. Can you live with that, Miss Moses?”
“I’ll have to,” said Miriam. “Unless I die with that, which is quite on the cards. You realize that, don’t you. I might never make it past Bass Strait.”
Harry cleared his throat. “Right,” he said. “Are you running to a schedule?”
“As in–‘if it’s Thursday, it must be Ingham?’ Well, I have one,” said Miriam. “I have a rough one, but I can’t promise to adhere to it. I may have to stop sometimes for treatment and I don’t know if I’ll be able to run then. Shall I telephone you once a week to let you know where I am and if I’m still alive?”
“That’d be a help,” said Harry.
Miriam, who had meant to be sarcastic, gulped and agreed. “I’ll be carrying a mobile,” she said remotely. “Doctor’s orders. But you can’t call me, because it won’t be turned on. I’ll call you–when I can.”

Miriam did call Harry at intervals during her long run. She met a great many other people and ran in and out of a great many bizarre situations, and the only constants for her were the run, the shoes… and Harry’s voice on the end of the line.

So of course she did.

Miriam ran. She ran along tarmac and the grey of it blurred her eyes. The beat of her Quicksilvers was soft in her ears, and the gentle rain swished down.

At the tip of Cape York, Miriam rang Harry one last time.

It wasn’t quite the end. Four days later, Harry flew to meet her… They had a lot to say to one another, and who knows how long they had to say it.

“You think you’d like to know the ending of the story.”
“Wouldn’t you?”
Harry put his arms around her, stroking her dark hair. “The running girl raised a great deal of money for charity,” he said. “She made a difference to everyone who met her, to everyone who heard her story. She fell in love with a man who sold shoes and she lived...”
“How long?” whispered Miriam. “How long did she live?”
“Long enough,” said Harry. “She lived long enough to be worth it.”

The goal for 2017 was to write a post a day profiling the background behind one of my books; how it came to be written, what it's about, and any things of note that happened along the way. 2017 is well behind us, but I ran out of year before running out of books. As of June 2018 I STILL hadn't run out of books, but many of those still to come are MIA by which I mean I don't have copies and remember little about them. There are more new books in the pipeline, and I'm certainly showcasing those, but in between times, I'm profiling some of my characters, places and objects. Thank you so much to everyone who's come along on this journey so far!
Posted by Flora at 08:28