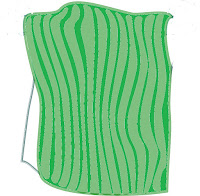 Sure enough, Deek pulled into a residential street and cruised slowly past the neat identical houses. They all had kitchen windows facing the street, hung with a variety of curtains and blinds. In one a green tea-towel had been pegged to the curtain.

Deek Caffrey was a fay man;

…a complex mix of leprechaun, pisky and teg with at least two strains of human; he was a loud man with a ginger beard so lush it seemed to be trying to swallow him whole.

Deek had a boisterous sense of humour and no tact, which was probably why he considered Kris Peckerdale a friend while Kris didn’t return the compliment. When Deek invited Kris out for a night at a club, Kris was inclined to refuse, but since he’d recently realised his life was closing in on him and going nowhere, he accepted. He wasn't too pleased when Deek said he had a call to make and told Kris to go on ahead to the club.

Kris moved unwillingly to the driver’s seat. Deek gave him a thumbs up, and he set off back along the street. Kris bet he was heading for the house with the green towel pegged up, but it wasn’t his business. He pulled away from the kerb.

Kris assumed Deek was having an affair with someone’s wife, and that the tea-towel was a signal. When Deek failed to arrive at the club, Kris wondered…

…how long he was obligated to hang around before calling it a night and heading back to wait outside the green tea-towel house. That might spoil Deek’s sport, whatever it was. Who cared?

Eventually he went back to the van, ind=tending to return to the tea-towel house to find him. Before he could do so, Deek joined him. It devolved that he did have a girlfriend; a young woman named Sharni who shared the tea-towel house with her elder sister, a dancer at the club. Shari was agoraphobic. As Deek told Kris…

… “she’s been getting better, and today we were going to try an outing. She put up the green towel to say she was still okay with it, so…”
The pause went on until Kris said, “What happened?”

…“ Shah was all ready to go, but when it came to stepping out the door, she just couldn’t face it.”

Deek and his girl spent the evening in instead. The situation made Kris stop to think about Deek and he came out of his reticence enough to ask the halfling to let him know how Shari was next time they met.
Beth and Sharni never actually appear in Calico Calypso, which is Kris’ own story, but the tale of their green tea-towel makes quite an impression on Kris and helps set him up for his own adventure.

The goal for 2017 was to write a post a day profiling the background behind one of my books; how it came to be written, what it's about, and any things of note that happened along the way. 2017 is well behind us, but I ran out of year before running out of books. As of June 2018 I STILL hadn't run out of books, but many of those still to come are MIA by which I mean I don't have copies and remember little about them. There are more new books in the pipeline, and I'm certainly showcasing those, but in between times, I'm profiling some of my characters, places and objects. Thank you so much to everyone who's come along on this journey so far!
Posted by Flora at 09:11