Source? The pig belonged to her grandmother when she was a child

Significance? Anna Louise used it to confuse her classmates
Fate? No doubt she still has it, although it might have gone to her daughter by now.
Author’s inspiration? A horse called hellicopper. Don’t ask.
Appeared in? Show Us!

Anna Louise had a talent for telling the truth in a creative way. Every day, the children questioned her about the putative pig. Anna Louise added artful detail in response.
Every day, a child challenged her to show us! Every day, Anna Louise had a new excuse, generally hooked to the pig-topic of the day.
Pigs are dirty? Not hers. She washes him! Show us? No… he might get dirty again.
How old is the pig? Old as old! He belonged to Anna Louise’s granny when she was a little girl. Show us! No… he’s too heavy to carry.
Does the pig cost lots to feed? He takes all Anna Louise’s pocket money! What colour is he? Black, with red spots. Show us! No… there goes the bell.
And so it went on until Saturday when Anna Louise was cornered by all five children determined for her to show us! 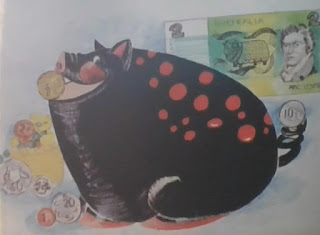 And so Anna Louise showed them.
And the next day was Sunday.
Then came Monday.

But there it stopped.

Knowing Anna Louise, she probably had.