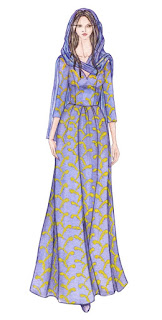 Source? Skye Bakewell made it for her as a gift
Significance? It made Pen feel beautiful
Fate? Pen wore it to the ball and thereafter on special occasions.
Author’s inspiration? Like Skye, I wanted Pen to have something beautiful to wear
Appeared in? Pen and Ink

Skye got up and went into one of the other rooms, then returned with a dress on a hanger. “Ta-dah!”

Artist Pen Swan had been widowed for three years. She felt drab and middle-aged. When she was invited to capture an acquaintance’s wedding in sketches, she went to her old friend Skye Bakewell for a new dress in a cheerful yellow print. Skye took her measurements and then sent Pen to have a spa. When she returned, Skye brought out another dress entirely.

Pen took the dress. As with all the clothing Skye made, it was exquisite, but it was also unlike her usual free and flowing styles. It was difficult to describe the pattern, which had a kind of tapestry effect, but the colours were indigo and gold. Pen held it up, and it fell into swinging folds. For a moment, she was speechless at the sheer beauty of the dress. It was the kind of dress for a once-in-a-lifetime occasion.
“But that isn’t the material we picked out,” she said slowly.
It was also not suitable for a wedding where she’d be working. The dress packed such a punch it was bound to upstage the bride. She literally couldn’t imagine ever going to a function where she could wear it.

Pen scrambled into the dress and pulled up the concealed zipper. She settled the body of the skirt around her hips and straightened the sleeves. Then she paced over to the big mirror. Her eyes widened.
The dress was perfection. It gave her spare figure definition, and the sweetheart neckline softened the angles of her face. It should have been heavy, but it fitted so well it supported its own weight at every centimetre of contact instead of pulling from her shoulders. It was simply cut and unornamented, so the beauty of the fabric took centre stage.
“The shawl is from me,” said Ryl, handing her a bubble-light confection that fell in graceful folds. It emitted a faint rainbow light.

Pen did get a chance to wear it when Duffy invited her to a ball over there. It felt like serendipity.

Pen opened her mouth to say she had nothing to wear, but then she recalled the gorgeous gold and indigo dress and iridescent shawl Skye and Ryl had given her. “Yes!” she said.

As Skye put it:

“This dress is just for you. You deserve something beautiful. Every woman does.”