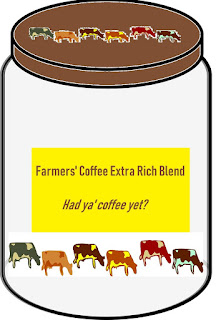 Source? Discovered by the rubbish bin
Significance? Arabella used it to collect all sorts of things, including the calf her sister Jessica was searching for
Fate? Presumably Arabella kept it for a while but eventually it would have been thrown out or recycled
Author’s inspiration? My children used to like putting things into jars
Appeared in? The Magician’s Box

“Go and ask Mum for a jar, suggested Jessica, but Arabella didn’t bother. She found an empty coffee jar by the rubbish bin instead.

Jessica Dove was devoted to the rather odd calf Silverwood, in part because she was odd herself. After winning a magician’s box at the show she thought  she had some good luck for a change, but her troubles continued. She was vague, clumsy and always seemed to annoy her parents. Silverwood disappeared, and Jessica was looking for her in company with her little sister Arabella. Arabella understood them to be playing hide and seek with a sooky calf, but she found other things more interesting. She found a worm and wanted something to put it in. Distracted Jessica suggested asking their mother for a jar, but Arabella appropriated an empty coffee jar from near the rubbish bin.

“Jecca, I put ‘m in the potty,’ she reported.
“Mmm,” said Jessica.
“I put tiny, tiny worm in the potty,” elaborated Arabella.
Jessica nodded.
“I put ‘m pillow in the potty…”

The ‘pillow’ was a grub, or caterpillar, and Arabella continued her monologue reporting the pottiong of a ladybird and a feather and a beetle and another beetle, a grub, an ant, a pretty leaf…

After a little coaxing, Arabella revealed the latest denizen of the coffee jar.

Jessica had to pry one of her hand loose before she could see past the label. And what she did see… she didn’t believe what she saw, at all!”

Later, Arabella told her eldest sister Anna about her adventure.

“I…I find a tiny, tiny sooky and put ‘m in a potty!” she bubbled gleefully.
“Don’t be cheeky,” said Anna in an elderly tone.
“Not that sort of potty!” said Jessica. “She means a coffee jar, one of the big ones.”

Arabella Dove and her jar appear in The Magician’s Box.