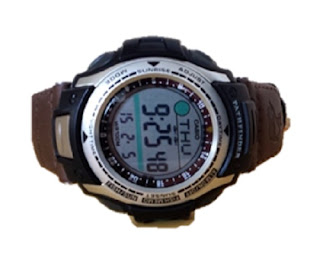 Source? Very likely Ben bought it with his wages
Significance? It was part of the reason Ben left the twins alone by the river
Fate? By now, Ben will have swapped it for a smartphone which is an updated version of the same idea. He may still have the watch in his sock drawer
Author’s inspiration? High-tech watches were big at one point
Appeared in? Kayak!

I call it a watch, but it’s more than that. Mum calls it ‘Ben’s Babysitter’.

Ben Winwood was eighteen and in his first job when he took his twin brothers, Mark and Luke, along with their kayaks, to the river where they were going to meet their uncle, Owen, for a kayaking adventure down the river.
The arrangement was that Ben would deliver the twins and their kayaks into Owen’s keeping, but it didn’t turn out like that.
Owen was late. Ben’s high-tech watch corroborated that fact. Ben relied on that watch a lot.

It tells him when to get up and when to go to sleep, what to wear and how many times to kiss high girlfriend – only kidding there. Seriously, it does just about everything but cook the dinner.
Right now it was telling him he was going to be late for work. Naturally, Ben was doing his ‘nana.

Ben was a helpful big brother. He looked like the twins (and they all looked like their father) and he shared their pride and care of their possessions. He lent Luke his own kayak for the trip, and he fully intended to wait for their uncle… but… 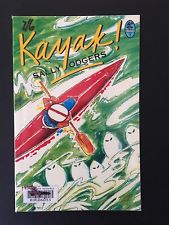 Ben, with a job to keep and a van and girlfriend to consider, reluctantly left, after exacting a promise from the boys that they would wait for their uncle.
Ben presumably got to work on time, but there was a world of trouble waiting for him later that day and not even his babysitter watch could get him out of it.

Ben Winwood and his babysitter watch appear in Kayak!