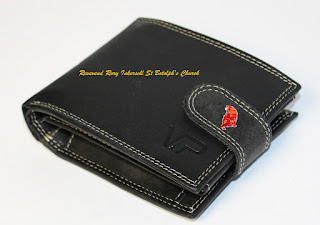 Source? It was probably a gift from Emer, Rory’s wife
Significance? It was a reminder that Rory, whatever else he was, really was a priest
Fate? Rory undoubtedly still has it, not being the sort to mislay things, or to trade in something that serves its purpose
Author’s inspiration? What else would a priest who is a part-time cat use to keep his ID?
Appeared in? Sunshower

***
Rory was already holding out an official-looking wallet.

By the end of Sam and the Sylvan, Sam Silver had a wonderful new life with her sylvan forever, Oash. In her new-found happiness, Sam remembered her great-aunt, Sofia “Sofa” Silver, who had been kind to her and who was now grieving her life away in a retirement home after losing the love of her life.

Sam wanted to do something nice for Sofa, but she lacked the funds and wherewithal to travel to South Australia, and, being in a delicate condition, she didn’t want to leave Oash. Therefore, Sam despatched Tab Merriweather and his friend Josefa to deliver a message to Sofa. This proved difficult, as Sofa had retreated into depression and was trying to will herself to death. Beatrice Florin, to whom Tab and Josefa appealed for help, had a recommendation for them.

“If Sofia’s beyond your reach—and I think she is—see if you can get old Rory to come to her. Rory Inkersoll, know him? Old geezer with red hair going grey, uses the St Botolph gate. Ginger stealth cat mani.”
“I know him,” Tab said.

They tracked Rory down and he agreed to help. It took a great deal of effort, but finally the three got Sofa responding. The next hurdle was checking her out of Summerleigh Grange after her seemingly miraculous return to sentient sanity.
Rory’s mercurial skills came in handy when June the receptionist demurred that she wasn’t authorised to release Sofia into the wide world.

Tab smiled. “You should probably get in touch with the manager. If it helps, this is Reverend Rory Inkersoll. He’s Miss Silver’s pastor.”
Rory nodded, contriving to look like a sane and saintly human man. “Bless you, daughter,” he said and waved his hand.
Josefa choked.
June blinked and relaxed. “Of course, Father. I think we have your name down somewhere.”
“I was visiting Mrs Florin, another of my parishioners, tonight, and she informed me of Miss Silver’s situation.” He bowed his head. “Weeping may endure for a night, but joy cometh in the morning. We were able to tell Miss Silver some happy news about her great-niece, who is expecting a baby. You’re welcome to call your manager, but if possible, Miss Silver would like to sign herself out so she can pay Sam and her partner a visit without delay.”
Tab bit the inside of his cheek. Rory was a master manipulator at work. The Reverend Rory had not told a lie, but he was pressing a gentle warming influence into June’s mind. The wicked old tomcat!
The receptionist straightened her shoulders. “I’ll just pull up the paperwork. If I might see some ID, Father?”
Tab reached for his own driver’s license, but Rory was already holding out an official-looking wallet. Presumably, he had picked it up before leaving his cottage. “I am retired now, but I still hold the occasional service at St Botolph’s. In fact, I had the felicity of officiating at the wedding of my grandson to his lovely lady just a few months ago. If you wish to call the bishop from my diocese, he will vouch for me.”
June looked towards her computer.

Naturally, Sofa got her release. Once Rory re-pocketed his wallet, conducted Sofa to Sam’s new home, and offered her temporary accommodation in his cottage while she pondered her options, Tab and Josefa set out to drive home.

June may have called the bishop, but probably not. If she had, Rory would have got a glowing recommendation. The bishop may have known Rory wasn’t human, but someone had to take care of the pastoral needs of parishioners that veered to the odd side of the compass.