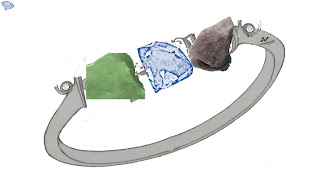 Source? Honey’s fiancé, Jake Peters, made it and gave it to her
Significance? It gave Honey a grand dummy-spitting gesture
Fate? Possibly still on the church roof, but more likely Jake retrieved it
Author’s inspiration? It seemed appropriate for an artist to make one
Appeared in? Honey and the Harvest Hob

***
Jake did provide some one-of-a-kind engagement bling, though, combining stones from three pawnshop rings in his own design.

The ring was a Jake Peters original which would have appealed to Honey, and which complemented her ooak wedding dress. She looked like a fairy rather than a bride, but as beautiful as she was, the wedding didn’t go ahead. Jake failed to arrive on time and when Honey contacted his brother, she discovered he wasn’t coming at all. Honey, understandably, was annoyed and offended.

…she raised her phone above her head and smashed it down on the stone-flagged path in the first act of wanton rage of her life. In the second, she dragged off her engagement ring and flung it over the church roof.

Unwilling to face everyone after personally informing the congregation that the wedding was cancelled, Honey decided to go alone on the pre-booked mystery honeymoon. The driver, Linda, offered brisk practical sympathy.

“In you get. Since you don’t want to talk, I suggest you get in the back seat. I’ll drop the privacy screen, and you can seethe, or cry, or sleep or obsessively click through photos or rant on social media or gaze misty-eyed at your engagement ring or whatever takes your fancy.”
Honey got in the back seat. “I smashed my phone and threw my engagement ring on the church roof.”
“Then I guess your options are limited to the first three.”

At the honeymoon cottage, Honey met Robin “Hob” Cottman. She asked him…

Haven’t you got a mobile?”
“Aye, but they don’t work over here. Have you not noticed?” He fished a smartphone out of his pocket, thumbed it on and showed her the blank screen.
“I might have, but my mobile’s in bits in a church foyer. God, why didn’t I grab the sim? I don’t want it, but what if someone else finds it? They’ll have my life at their fingertips. My old life.”
“Happen it fell down a crack,” he said. “Most churches have crannies galore.”
“And happen my ring got lodged in the tiles?”
“Happen it did. You can always replace it.”
“It was unique.” Honey put her elbows on the table and propped her chin in her hands. “Why are we saying happen? Are you from Yorkshire?”

Eventually, Honey talked to Jake and they made their peace. Jake explained…

“I did have second thoughts, but by then it was too late. I’d walked out and left my phone with Chris. It was too late to get to the church, so I cut my losses and went on a bender.” He took a deep breath. “I came to the flat a couple of days later, but you weren’t here. There was a note for you on the mat but nothing for me. I tried to call you and texted you, but you never turned your phone on.”
“I smashed it. And I chucked my ring onto the church roof.”
Jake whistled a long descending note. “Lucky I didn’t find you then.”

Honey did marry, and she did use her one-of-a-kind wedding dress at her husband-to-be’s request, but she certainly didn’t use the ring. Presumably Jake got it back (with Honey’s blessing). Being an artist, he most likely used it as the centrepiece of an installation called something creative along the lines of Second Thoughts.