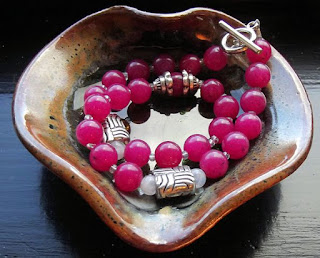 Source? Corrie’s friend Jase gave it to her
Significance? Apart from her bathers, it was the only thing she had with her when she entered Sisterin
Fate? Corrie gave it to Ethan as proof of her presence
Author’s inspiration? A coral bracelet seemed suitable for a girl named Corrie
First appearance? Under the Waterfall

I had just the tiger-print swimmers I was wearing, and a silver and coral charm bracelet around my wrist. I thought about using that, but Jase had given it to me. Not that he's my boyfriend, but because he thinks I'm cute-  (Cute? If anyone else said that, I'd snotter him.)

Corrie’s mum and dad left her at the campsite to mind her disabled brother, Ethan. Corrie swam under the waterfall, just to get a little bit of peace, and when she swam back Ethan had disappeared. So had the camp site. Corrie waited but no one came back, so she decided to go and look for help. Having nothing to write with, she considered leaving her bracelet to point out which way she’d gone, but decided to use stones instead.

I looked at the bracelet, and decided it was too small to show up well. And I might need it later. It wasn't worth much, but it might do for security if I had to borrow money to get myself home. If I couldn't contact Mum and Dad by phone.

Corrie failed to find her parents or Ethan, but she encountered a boy named Athen who (aside from his clothing) looked very much the way Ethan would have had he not been injured in a car crash. He took Corrie to his mother’s house but she soon discovered the local customs were very odd. Since she had no crede, or vocation, she was deemed a nullard and accused of violating the hospitality of the damerie.

"If there were something I could use to pay my board..." I looked at the bracelet on my wrist. "Can I pay them with this?" I asked Athen.

She couldn’t.
Eventually, Corrie decided the only way to get back to her own world was to swim back under the waterfall so…

So wearing just the nullard's tunic and my coral bracelet, I finally waded into the water.

The effort to get home failed, and it was a long, long time before Corrie finally made it. By then she had a different perspective on life. To her astonished delight, her brother Ethan met her at the former camp site, having persuaded their parents that Corrie would come back there if she ever could… Corrie asked him where they were.

"Up there. In the car," said Ethan. "They wouldn't come down."
"Maybe they will if you tell them I'm here," I said. "You tell them you found me. And show them this." And I took off the coral and silver bracelet as proof.


Corrie’s silver and coral bracelet, the only thing she retained through all her adventures, appears in Under the Waterfall