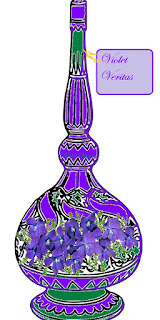 Source? Russ often bought it for her
Significance? It was Kay’s signature perfume and it provided a much-needed bridge between her and Ryl
Fate? Kay went on wearing it even when it became increasingly difficult to source. Finally I expect Russ and Tom tracked down a legacy supply and bought it all for Kay.
Author’s inspiration? I always loved Devon Violets which you can’t buy anymore.
Appeared in? The Kissing Ring

Kay had pinned up her hair and wore a violet perfume Russ often bought her. She’d worn it for years, and Tom had always liked its wholesome unambiguous scent.

Kay Merriweather wasn’t too pleased when she discovered her only son had exchanged rings with a girl she’d never met. The fact that Ryl Skipton was only just sixteen certainly didn’t help. Fortunately, Kay’s husband had met Ryl and between them he and Tom mollified Kay enough to agree she’d meet Ryl and her parents when they came to visit.

Kay had bought a new dress, but at the last minute, she’d apparently decided to stick with familiarity instead, in high-waisted jeans and a soft sweater in the colour of rose quartz.

She also bolstered her confidence with her favourite perfume.
The first encounter between the most important women in Tom’s life could have been sticky, but Ryl said just the right thing when she identified Kay’s perfume and mentioned another of Kay’s passions in the same breath.

Ryl let go of Tom’s hand and smiled. “Hello, Mrs Merriweather. I like your perfume. It’s called Violet Veritas, isn’t it? My music teacher at St Dorothy’s wears it.”
“That’s right.” Kay looked her over. “You enjoy music?”
In fact the meeting went better than Tom expected…

He didn’t expect his mother and his love to be instant best friends, but Ryl had said all the right things so far, and he hadn’t coached her at all.
The name of the perfume, Violet Veritas, stands for truth, and the truth is that Kay wasn’t quite as conventional as she seemed. She had quite a temper when roused and although Russ wouldn’t agree with her first choice for their son’s name, which was Tom-Tom, he’d acquiesced when she slipped in Tambourine as a second name.