Source? Most likely a consciously retro brand Terror buys for the hell of it, maybe to 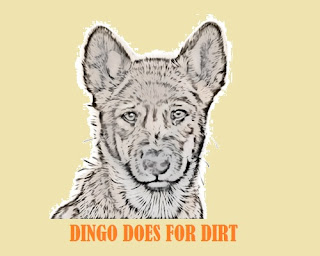 Significance? Terror likes to emphasise his Australian heritage with colourful language and mannerisms
Fate? No doubt he continues to buy it, or maybe his mum sends it to him in care packages
Author’s inspiration? It popped into my mind, just as Terror himself did. There’s an old soap I’d dearly love to find for sale…
Appeared in? New Dreams

“They were purged. Not a flea’s chance of surviving Dingo Soap,” the tech reminded him.
Terrence “Terror” Australis was one of the volunteers flying Indira to the rescue of the crashed spaceship, Elysian Dawn. Terror was a technician with a robust sense of humour and an endless fund of salty comments. He prided himself on ingenuity and calling a spade a bloody shovel, so he was mortified when Dr Harry Fejoa seemed to doubt he’d checked that the Indira shuttles might be contaminated with the silver substance from Elydia.

[Harry Fejoa] approached Terrence Australis, the tech who’d intercepted him before. “I know you said these things are unfixable, but I suggest you check them for anything that shouldn’t be present, right now.”
“Eh? Like what?” Australis asked.
“That silver substance from the planet.”
“They were purged. Not a flea’s chance of surviving Dingo Soap,” the tech reminded him.
“Yes, but did you check the outside works…”
“Oh, shit!” Australis snapped into action, and Harry knew things were going to get very bad, very soon.

Partly due to Harry’s intervention and partly due to Terror’s swift actions thereafter, the danger was bypassed. As they both knew, no matter how powerful Dingo brand soap might be, it would be no match for the silver substance of Elydia.

Dingo soap is mentioned just once, in New Dreams but Terror Australis is such a satisfying character to write that he (and maybe his soap) will almost certainly turn up in a later book in the series. My money’s on Flotsam and possibly on Rachel Outward Bound

The goal for 2017 was to write a post a day profiling the background behind one of my books; how it came to be written, what it's about, and any things of note that happened along the way. 2017 is well behind us, but I ran out of year before running out of books. As of June 2018 I STILL hadn't run out of books, but many of those still to come are MIA by which I mean I don't have copies and remember little about them. There are more new books in the pipeline, and I'm certainly showcasing those, but in between times, I'm profiling some of my characters, places and objects. Thank you so much to everyone who's come along on this journey so far!
Posted by Flora at 10:35