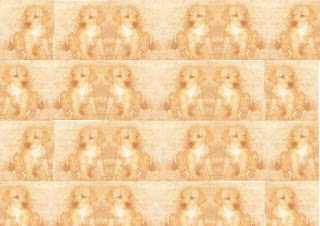 Source? Tim thought she’d probably got it at a chain store
Significance? It gives some insight into Tim and into Mistress Amalie
Fate? Jin probably had it laundered and returned
Author’s inspiration? It suggests Amalie isn’t quite as sophisticated as she seems
Appeared in? Man Overboard

Timbre conjured a handkerchief with puppies printed on it, gazed at it with surprise, shrugged and gave it to Jin. “Courtesy of Amalie and a chain store, I expect. Next?”

Timbre Merriweather could make electronics do things they wouldn’t do for anyone else. This even included forcing recalcitrant mobiles to work inside the wards at Peckerdale Grene Community Tower. When Jin Peckerdale needed to make some emergency phone calls to let various people know Zach Rowan wasn’t, in fact, drowned, Tim got his dad’s phone to cooperate. Jin, already feeling fragile, couldn’t keep up her usual cool façade in the face of Zach’s family’s distress, and actually found herself crying.

Speaking with Zach’s stepbrother Nikolai was even more of an ordeal, but at least he answered his own phone. He cried. Jin felt tears trickle down her cheeks. Since when did she do empathy?

Luckily, Timbre had gained some insight into emotional young women from spending time with his dance partner Amalie, so when he conjured a handkerchief for Jin, he just naturally acquired one of Amalie’s by mistake…