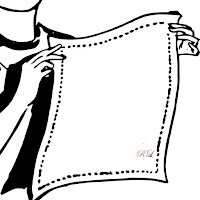 Source? Probably his mama bought it for him
Significance? The use to which he put it showed his innate kindness
Fate? Probably Prudence Frame had it laundered and kept it in her drawer, scented with lavender
Author’s inspiration? The term dropping a handkerchief was code for attracting a suitor
Appeared in? Long Ago Love Songs

(He offered her a handkerchief.)

Prudence Frame, a Yorkshire mouse making her debut, accepted Dickin Lutey’s invitation to waltz at a ball. Alas, she’s forgotten (if she ever knew) that waltzing before she’d been given leave by the leaders of the ton would put her beyond the pale. Dickin, who had forgotten too, found her in tears.

“So,” said Dickin by and by
“Imbroglio becomes my brief.
Dry your tears milady Prue.”
(He offered her a handkerchief.)
Oh!

Godfrey-Daniel! Dickin Lutey
To your name you have a duty
Never drop your handkerchief
You are here to court a beauty
Oh!

“All is ruined!” wept poor Prue
“Ma had money for one season.
Now I must return unwed
For such a ninnyhammered reason.”
Then she plied the handkerchief
a piece of nicely laundered linen
and peeped at Dickin over it…
He seemed unfazed by crying women.

Dickin, encouraged by the tearful Prue, came up with a way out of the mess she was in… of course.
After all…
But Dickin’s won himself a beauty…
(and her name is Prudence Lutey)