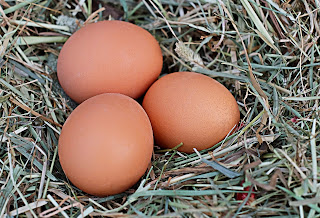 Source? They came from a nesting box at Glenheather farm

Significance? Trina used them as spur-of-the-moment missiles
Fate? More or less what you’d expect to happen to eggs flung at an escaping bull
Author’s inspiration? Sometimes throwing something is the only way when you can’t run fast enough to head off a beast
First appearance? Kissing Cousins

There were seven brown eggs in the nesting box, so she slipped her hand in to collect them. She’d transferred five to the bowl and was stretching hopefully for the last two when something that felt like damp sandpaper swiped the back of her neck.

Trina Garland was hiding out from an abusive boyfriend at her cousin’s property in Tasmania. It’s a long way from a bijou boutique in Melbourne, to a country sheep farm, but Trina hoped for rest, recuperation and not too much excitement. She hadn’t bargained on Beauregard… in fact, she hadn’t bargained on bulls at all.

She gasped, jerked upright and banged her shoulder painfully on the top of the nesting box.
“What¾?”
Her indignation died as she turned to confront two large brown eyes blinking at her mildly.
“Hello, Beauregard,” she said warily. Slowly, she backed away.
The bull gave a piercing snort, wheeled away and trotted off towards the driveway. His legs and flanks were coated with mud that had dried into armadillo armor. He was obviously contemplating another adventure. A new assault on Ma Higgs’ cabbages, perhaps, or a stroll on the pride of the Bowling Green. There was no knowing where he’d end up if someone didn’t cut him off before he reached the road.
Where was Alister? Where were Brett and Marcus? Where was the efficient Hilda?
Nowhere, apparently. Except for herself, the fowls and the rapidly departing Beauregard, the yard was empty.
“Alister!” she yelled. “Come get your bull!”
Startled by the sound of her voice, Beauregard clapped on more sail, his neat brown legs flashing like an Olympic sprinter’s.
“Damn,” she muttered. Handicapped by Cousin Ish’s gum boots, she couldn’t run down the curving drive and hope to overtake the athletic young bull. The only way she could possibly manage was to run straight down the empty paddock and get to the road ahead of him.
She dodged through the open gate and ran down the paddock. It was years since she’d run like this, probably not since her final school athletics carnival. Her feet slithered in Cousin Ish’s boots, and the boots themselves seemed curiously lacking in traction. The horizon danced dizzily before her, with glimpses of Beauregard trotting smartly. She’d never overtake him at this rate.
Then, suddenly she realized she had overtaken him, and that all she needed to do was to get back onto the drive to block his exit to the road.
The problem was, there was no gate and she’d never be able to scramble over the wire fence in time.
Vaguely, she heard voices behind her.
Idiots, she thought, they’ll make him go faster! If there was only something she could throw in his path. If only—
Well, there was something. She pelted it with all her strength, then sat down suddenly, hard, just as Hilda streaked past her, flowed under the fence and confronted the athlete with a bounce and a bark.
Between them, she and Hilda had stopped Beauregard’s escape.

“You threw an egg at him,” said Alister. “You actually threw an egg at a bull.”
“Actually, it was two eggs. I had to stop him somehow. I didn’t know Hilda was on the job.”

Bull wrangling with Hilda the sheepdog wasn’t precisely what Trina wanted to do that day, but it proved to her that she could be both active and resourceful in an emergency. Mind you, a cheeky young bull was nothing to her enraged ex who was contemplating a visit.
Trina’s brown egg missiles appear in Kissing Cousins. Trina herself also crops up in In Mara’s Case. The Glen Heather property appears in Heather & Heath.