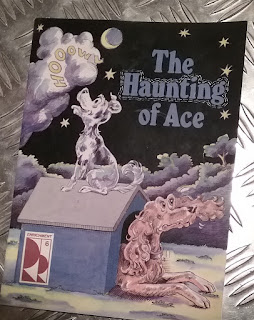 Source? Bought or possibly built especially for Poodle when she was young
Significance? The kennel was a symbol of her importance
Fate? Ultimately, Poodle ended up sharing it with Ace
Author’s inspiration? I wanted something that was both a prized belonging and something that could be shared
First appearance? The Haunting of Ace

It was that long-legged pup, tucked up in the straw in my kennel…

Poodle McAllister was a small dog of mixed breed and great personality. She was getting a bit stiff in the mornings, but then, she wasn’t young. One day she forgot herself and chased a motorbike.
After that, things changed for Poodle. She felt young again, but despite her best efforts no one patted her anymore. Then her family made the ultimate betrayal; they obtained a leggy setter pup and installed him in her kennel!
Poodle was furious, but then she found the pup moping and lonely, so she joined him…
After all, it was my kennel!
Poodle got used to having a room mate and so did young Ace. He was soon devoted to Poodle, even if she was a bit see-through!

Poodle McAllister, her kennel and young Ace appear in The Haunting of Ace