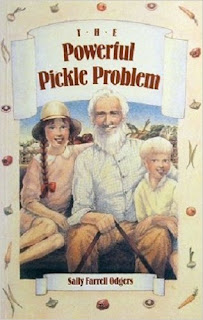 Source? Grandad Pickle probably got it from the Copper Creek Newsagency. Or maybe Polly did.
Significance? The Book was where Grandad Pickle wrote down all his famous pickle recipes...except for one.
Fate? No doubt the Book is now under a glass case in the Pickle Palace Museum at Copper Creek.
Author’s inspiration? Where else would one write down special recipes in the 1930s?
First appearance? The Powerful Pickle Problem

The Book was a heavy volume, with a green leather cover and gold-edged pages. The first thirty pages were filled with Grandad Pickle's spiky handwriting. Recipes for conserves, recipes for preserves. Recipes for pickles. Every pickle that Grandad Pickle had ever made - except one. Powerful Pickle! The Book had once been kept at the Pickle Palace, but Miss Watts had copied out the contents and put them in a proper filing system.

Grandad Pickle was Anne and Robert's name for Fred Appleby, their grandfather, who is 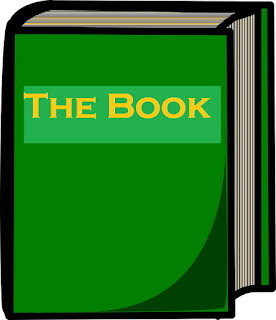 the brains and expertise behind Copper Creek's famous pickles. The story goes that Polly, Fred's wife, was trying to make pickles and being unsuccessful. Fred took a hand and turned out to be a pickle-magician. Soon his pickles were in high demand. There were Plain Pickles, Princely Pickles, Creamy Conserve, Popular Pickles, Particular Pickles and a long list of others. Soon he has a small team working on production and innovation. Fred wrote down the new-minted recipes in The Book, as described above. It's probably not a coincidence the The Book is green with gold-edged pages and so much bear a family resemblance to the one Amy Day has in Amy Amaryllis. I only just realised that, three decades on. Both books derive from one I had as a child.
In any case, Fred wrote down all his recipes except for one; Powerful Pickles, the most startling of the lot. That recipe he kept locked away in his fertile brain... until he fell off Bess the pony and knocked the precious information somewhere north of the Milky Way.
Once the memory was recovered, Fred wrote it down in The Book...and locked it away. One hopes he didn't forget where he kept the key.
The Book appears in The Powerful Pickle Problem.