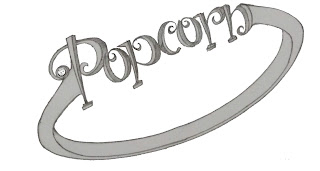 Source? Guy Popplewell obtained it from Meryrn Pendennis with Tom Merriweather acting as his proxy
Significance? Guy admired Ryl’s ring and wanted something similarly unique for his girlfriend
Fate? The popcorn ring is still on Mish’s finger. She wears it all the time.
Author’s inspiration? Mish and Guy are one of my favourite subsidiary pairings and I wanted to look at the way fay influence spreads through the human society.
First appearance? The Kissing Ring

Popcorn Guy got up and fidgeted.
“What?”
“Um. You know that ring your girl wears?”
“What about it?”
“It’s kinda—I dunno…I want to get something like that for Mish, and there’s this bloke who goes around the markets selling silver jewellery. I want to see what he’s got.”
Tom gazed after Popcorn Guy as he headed across the market. It would be too odd if Merryn Pendennis was there in rural Tasmania.
He wasn’t, it seemed. Popcorn Guy came back wrinkling up his expressive snub nose. “Cheap imported junk. Guess you won’t tell me where you got that one for Ryl?”
“A place called Treborrow,” Tom said.
“Never heard of it.”
“Not many people around here have. Tell you what, give me your number and next time I’m there I’ll see what he’s got. He goes around the markets in Victoria. What are you after?”
“A ring.”
“Friendship ring? Engagement ring?”
“Hold on a bit…not going that far. I just want something nice for my girl. Something you won’t see on other girls. Something special.”
Tom explained, “When I got Ryl’s ring, the jeweller had me tell him about her. If you’re serious about this, write down stuff you think about Mish and stick it in an envelope. Seal it if you like. I’ll give it to the jeweller and hand him your number. He might get in touch and then you can do your deal. He does one-offs, and he’s more likely to ask you for a favour than money.”
“What kind of favour?”
“Nothing illegal or immoral. Sort of a pass-it-on kindness maybe. That’s what he asked me to do. His name’s Merryn Pendennis.”
“Can you give me his number?”
“He’s not on the phone. Lives way out…no electricity, even. Not even near a Post Office.”
“Okay. I’ll go with that. Got some paper?”
“No. Give it to me next time.”
“Thanks, Tommy. I’ll owe you one.”

Guy Popplewell was one of the tutors at the tech college where Michelle “Mish” Verhoven studied. She wasn’t in his course, but he used to see her around and one day he encountered her at the cinema with her ex-boyfriend-turned-platonic-pal. He invited her for popcorn and they didn’t return. Some time later, Guy and Mish, Tom and his new love Ryl Skipton went to a market, where the above scene takes pace.
Somewhat to Tom’s surprise, Guy did follow-up and he faithfully delivered the information.
Mish and Ryl became good friends, and later Mish telephoned Ryl, who told Tom about it…

And by the way, she telephoned and told me he’d given her a silver ring that spells out popcorn. Does that have anything to do with you?”
“Just a bit.” Then Tom told her about his conversation with Popcorn Guy at the market.
“But when did you see Master Pendennis to arrange this?”
“I didn’t. I gave the envelope to Oison, and he promised to take it to Treborrow. Obviously, he did.”
“And if your Mish knew her old boyfriend had told her new lover about a pisky man who is sometimes a dog and had given the necessary information to a leppy gossoon to deliver so she could get the nicest present she’s ever had, what do you think she’d say?”
“I have no idea. And she isn’t my Mish. She never was.”

Years later, Timbre, youngest son of Tom and Ryl, mentioned he’d been talking to “Mish Popcorn” while visiting his grandfather who still lived in Tom’s old hometown. Given the nickname, it’s clear Mish and Guy are still together, and Mish is still wearing her popcorn ring.