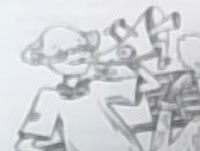 Source? Professor Query made it when he acquired his daughter Erica for an extended stay while her mother worked overseas
Significance? It annoyed Erica. A lot.
Fate? No doubt the prof still has it, but no longer uses it… unless he has absentmindedly sired another daughter. To be fair, he made a matching fathercaller.
Author’s inspiration? I liked the name
First appearance? My Father the Mad Professor

Pppppppparrp! Pppppppparrp!
“What on earth is that?” I spluttered.
He put down the horn. “This is my patent daughtercaller, Daughter,” he said smugly. “Designed to fetch the deafest daughter.”

When Erica Query’s film director mum landed a three-movie deal in New Guinea, Kathmandu and Iceland, she assumed Erica would be thrilled. Erica, however, just wanted a normal life. To achieve this, she proposed going to stay with her friend Sarah Huppingdon-Fairfax. Mum has a counter-proposal; maybe Erica should visit her father in Tranquillity. He’s a vague professor, but Mum says Erica will like him… and she can always go to Sarah’s if things don’t work out.
Erica and Professor Oliver Query got off to a bad start when he failed to meet her at the station as arranged. He said he did go to meet her at the designated time. It devolved that Professor Query wore a 24-hour watch and had turned up before daybreak instead of in the late afternoon.
He also had a parrot named Quintus who spoke in rhyme, a terrible taste in food, temperate searabbits in the swimming pool, a spaceship in the garden and a telescope on the roof. His inventions infuriated Erica. They were either annoying (like the wake-you-with-a-song alarm clock) or forbidden (like the gliderbike).
Worst of all, apart from the food, from Erica’s point of view was the patented daughtercaller.

Just then, I heard something worse than a yodelling clock. It was a loud parping noise, magnified, like a thousand parrots blowing raspberries, all at once.
Pppppppparrp!
Like that.
I nearly fell downstairs. I thought Martians were invading Tranquility, at least. But when I arrived in the kitchen, I saw my father holding  a horn to his mouth. As I watched, he blew it again.
Pppppppparrp! Pppppppparrp!
“What on earth is that?” I spluttered.
He put down the horn. “This is my patent daughtercaller, Daughter,” he said smugly. “Designed to fetch the deafest daughter.” 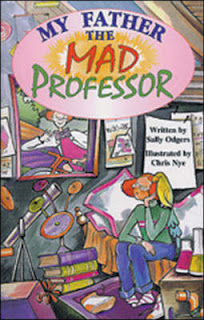 I dug my fingers in my ears and waggled them. “I’m not deaf,” I said, “but if you keep on blowing that awful thing I soon will be.”
He put away the daughtercaller in a drawer. I made a mental note of its location, so I could sabotage it later.

That’s not the last we saw of the daughtercaller, and eventually, despite Quintus’s distress, Erica departed to stay with her friend Sarah. This gave her the chance to experience bor- um normal -life with parents whose main mode of conversation consisted of yes dear and no dear. Erica’s note of propitiation to her father crossed in the mail with his apology to her and they came to an understanding. The daughtercaller was heard no more.

The daughtercaller appears in My Father the Mad Professor