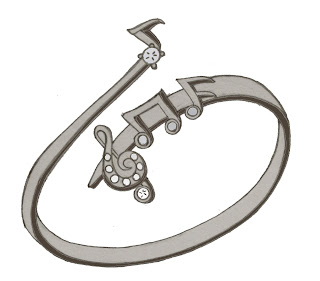 Source? Amalie de Courcy got it from Merryn Pendennis to give to  Tim
Significance? Timbre is a year younger than Amalie; this is her promise that she’ll wait for him.
Fate? Tim wears it and plays with it in moments of introspection or stress.
Author’s inspiration? It seemed the obvious thing for her to do
First appearance? Man Overboard

“Clear as mud,” Tom said. He waited expectantly, but Timbre was quiet, twisting the silver kissing ring, adorned with an unsettling pattern of musical notes, that he wore on his wedding finger.
“You okay, Tim? Yourself, I mean?”

Like his mother, Ryl, Timbre Merriweather fell in love hard and early.  He was sixteen when he fell for Mistress Amalie de Courcy, Ryl’s ward. She was seventeen and so, by fay standards, she would be an adult a year earlier than Tim. He loved her but his discomfort at the thought of her finding someone else was such that she took matters into her own capable hands and had Merryn Pendennis make him a kissing ring. Tim was soothed, knowing this meant she would wait for him to follow her into what, by fay parlance, was termed "enough years". His parents weren’t exactly pleased, but as his father Tom put it, they couldn’t exactly complain when Ryl had been even younger. And who said young love didn't last? Over thirty years after their first meeting, Ryl and Tom have never regretted it for even a moment.