Source? James bought it second hand
Significance?  It spells freedom for James, Stamp and Ace as they travel Australia.
Fate? James still has it
First Appearance? Farm Rescue
Author's Inspiration? It's the vehicle to have 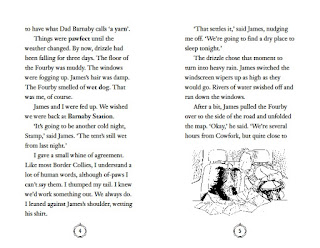 James Barnaby and his dogs Stamp and Ace are out and about on a working holiday during James' gap year. They travel in the Fourby, a sturdy if somewhat battered four-wheel-drive. The Fourby goes everywhere, through water, mud and bulldust. up mountains and through the outback. It is James' home away from home. In it he carries his camping gear, clothes and a radio, along with his two dogs and their gear.

You can read about the Fourby and James and the gang in the Pup Patrol series.