Source? Linda and Jory went to a corset shop and chose it together 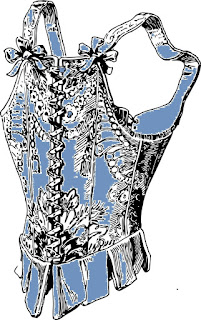 Significance? It was a garment that pleased both of them for various reasons
Fate? Linda undoubtedly still has it… unless Jory has custody at present.
Author’s inspiration? Made up: something to suit Linda’s hob tendencies as well as Jory’s pisky ones
First appearance? Pisky Business

It was a curvy affair of denim, studded with silver rings, hooks and clasps, most of which had no functional purpose. There had been simpler ones in the shop, but she’d seen how Jory’s eyes widened at the sight of all those embellishments and selected it without a second thought…

`The corset started out as Linda’s effort to stop snapping at her old friend/adversary-turned-lover. When he first suggested it, she actually managed to think before rejecting the idea out of hand. Instead of pushing it aside, she gave it some proper thought… The corset marked one of the turning points in their long and sometimes contentious relationship. They enjoyed playing with it though Linda did point out…
“This has got nothing to do with submission, okay?”

The corset was a favourite of Jory’s, and it was the first thing that springs to Linda’s mind during a close encounter some time later when they’re discussing belts, braids and bands.

“Lovely Linda, remember I’m half human. That half wants you just as much if you haven’t a band or a braid or a tie on your body. I can think of one band I’d like to have on you though.”
“My corset?”
“Love the corset. The corset is my pisky heaven. But I was talking about a band here. He slid one arm down and took her left hand in his, closing his finger and thumb around her fourth finger. “Would you? Will you?

Some years later, with Linda expecting their second child, Jory borrowed the corset for a job that wasn’t, but might have been, a singing telegram. Linda collected him after the job and noted the absence of the corset.

“Where is the corset?”
“The corset is safe. Would I let anything happen to the corset?”
“Why [were you wearing] the corset?”
“It’s been feeling unoccupied of late. I was showing it some love.”…

The goal for 2017 was to write a post a day profiling the background behind one of my books; how it came to be written, what it's about, and any things of note that happened along the way. 2017 is well behind us, but I ran out of year before running out of books. As of June 2018 I STILL hadn't run out of books, but many of those still to come are MIA by which I mean I don't have copies and remember little about them. There are more new books in the pipeline, and I'm certainly showcasing those, but in between times, I'm profiling some of my characters, places and objects. Thank you so much to everyone who's come along on this journey so far!
Posted by Flora at 06:00